AVENGERS: STANDOFF Takes Over Your Comic Shop For Launch Parties This March!

The Mystery of Pleasant Hill Unfolds at Your Local Comic Shop!

AVENGERS: STANDOFF is coming.  And Marvel is making sure all comic book stores worldwide are armed and ready to uncover the truth behind Pleasant Hill when AVENGERS STANDOFF: ASSAULT ON PLEASANT HILL ALPHA #1 comes to retail stores in March! In addition to being among the first to purchase and read the first chapter of this epic crossover, fans will also be able to receive special items exclusive to these launch parties.

Each retailer opting in to the event by February 1st will receive an AVENGERS: STANDOFF party kit from Marvel, containing exclusive promotional materials. Check your Marvel Mailer for more information on how to opt-in and ensure your store has access to these promo items.

“It looks like any other remote small town, only Pleasant Hill is anything but,” says Marvel SVP Sales & Marketing David Gabriel. “STANDOFF is going to have some long reaching effects on the Avengers titles and the Marvel Universe as a whole. Shocking twists, new players, and new teams await and we’re making sure comic shops are armed and ready.”

All qualifying retailers will receive the following as part of the Avengers: Standoff Party Kit:

Avengers: Standoff Build Your Own Captain America Promo Item 1 (of 6)

Mass media promotion around the launch of Avengers: Standoff and the associated parties

Retailers who qualify will also be eligible to order the AVENGERS STANDOFF: ASSAULT ON PLEASANT HILL ALPHA #1 exclusive Gwenpool party variant. Everyone wants to know the secrets hiding in Pleasant Hill. Even the Marvel Universe’s newest resident, Gwenpool! From Marvel newcomer Jay Fosgitt, don’t miss this exciting variant only available at launch parties. 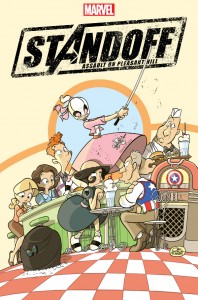 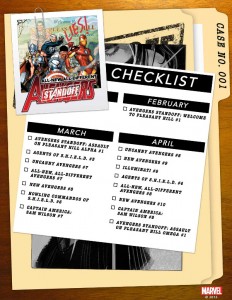 On Sale in March!