The Avengers Vault: Get To Know Earth’s Mightiest Heroes 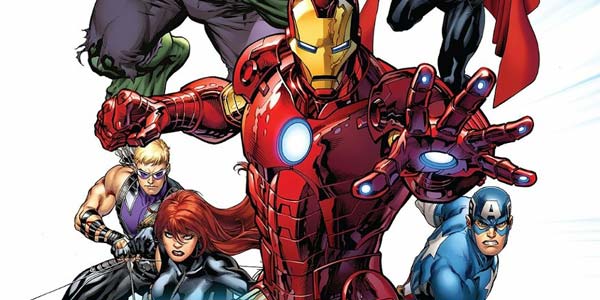 Peter David’s new book from Thunderbird Press will teach you everything you need to know about The Avengers (but were afraid to ask).

It’s been over 50 years since The Avengers made their debut, and obviously, a lot has taken place between then and now.  Comic books have changed as a medium, with digressions toward camp and overt seriousness, trends like stylized art and punchy dialogue, and countless other stops along the path of progress.  The characters have changed, too, becoming more rounded and realized in the hands of some of the great writers who guided them (and sometimes becoming werewolves in the hands of the less-great writers).  And our culture has changed… and with it the Marvel universe in general, which has always sat in a parallel analog to our real world.

In short, there’s a lot of history behind the Marvel universe, and its premiere super hero team… and the new book The Avengers Vault does a great job of encapsulating that history.  The 176 page book is a great resource for newcomers to The Avengers, as well as long time readers looking for a Cliffs Notes recap of the team and its members’ “greatest hits.”

Written by Peter David, long time scribe of The Incredible Hulk, among many other comics, The Avengers Vault is informative without becoming exhaustive, taking us through the years of the Avengers’ story from 1963 to the big screen and beyond.  After tracing the entire team’s journey, David’s subsequent chapters highlight each of the core team members, including Captain America, Iron-Man, Thor and– of course, the Hulk.

Each history summarizes all the “need to know” information about its subject, breaking down the hero’s path throughout the years, how they came to The Avengers, and where they are now in terms of both the contemporary comic books and their cinematic counterparts.  We also get profiles of each hero’s allies and most iconic villains, and plenty of wonderful full color artwork reprinted throughout the book, spanning the history of the Marvel universe from the Silver Age to today.

The Avengers Vault delivers lots of information about its subjects in an easily digestible and visually dynamic format, and each chapter also features a very cool addendum, a pocket filled with art prints, page reproductions and more little replicas from Marvel’s past.  Whether it’s a reproduction of a membership card to the Sentinels of Liberty (the first Captain America fan club) dating back to 1941, or a 1976 illustration of The Hulk by the legendary Jack Kirby (the last piece of art he did for Marvel), each piece of bonus material is interesting in both a visual sense and in terms of its place in Marvel history.

At just shy of $30, The Avengers Vault makes a nice addition to any book collection.  It can serve as a nice cornerstone to any comic book collector, or as the single comic-related book on the shelf of any reader who’s captivated by the big, rich world Marvel has crafted.

The Avengers Vault is available now at bookstore everywhere, and you can order it from Amazon HERE.