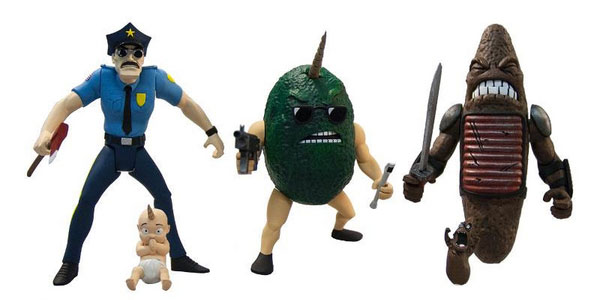 One of the highlights of Toy Fair this year was our first look at Mezco’s upcoming Axe Cop action figures.  Based on the web comic by Ethan and Malachai Nicolle, these figures looked perfect for any fan of the unique and completely rad series.

Now thanks to a new press release, we get official word on the figures, which are due out in October (shortly after the new animated series kicks off this July).  I’d be willing to bet we will see some kind of Axe Cop exclusive at Comic Con, though… it seems like a waste to not preview the line in some capacity at nerd Valhalla.

He’s the best crime fighter the world has ever known thanks to his trusty axe, his pet T-rex, Wexter (with maching gun hands!) and a group of crime-fighting partners unlike any you’ve ever seen!

Axe Cop is the internet comic sensation based on a story a five year-old boy narrated to his twenty nine year old brother, who happens to be an illustrator. What began as a simple tale became an award-winning comic, and upcoming animated tv series on Fox, and now makes the leap to super cool collectible with Axe Cop 4inch Scale Figures Series 1!

Axe Cop -The star of the show, with axe, poopsucker gun (to help him conquer Planet Poop), Uni Baby, and lemon grenade (all the explosive power of a regular grenade but with a lemony freshness).

Ethan Nicolle, the artist behind Axe Cop, says: “Mezco worked closely with us to make the toys faithful to the comics and to pick the fan favorites. Many of the toys look so much like my drawings in three dimensions it’s almost spooky…I’m excited to have Mezco making Axe Cop toys because they walk a great line between toys to look at and toys to play with. Axe Cop is for kids and adults and I think Mezco nails that market with their intricate but not-too-fragile designs. “

All Mezco Axe Cop figures feature up to five points of articulation.

Each figure is individually packaged in a display friendly blister package covered with Axe cop artwork.

Look for Axe Cop Series 1 and Axe Cop Deluxe Figures at Toys”R”Us and other fine retailers!

Axe Cop chops his way into stores in October 2013. 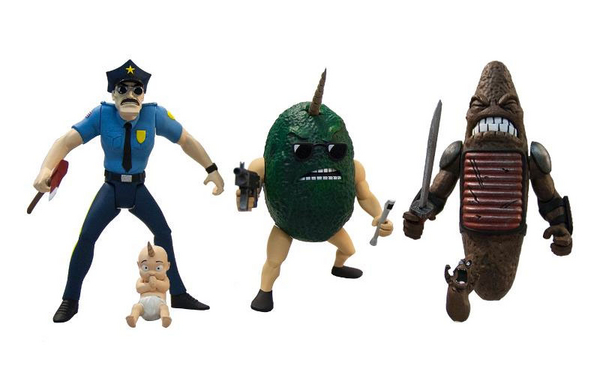