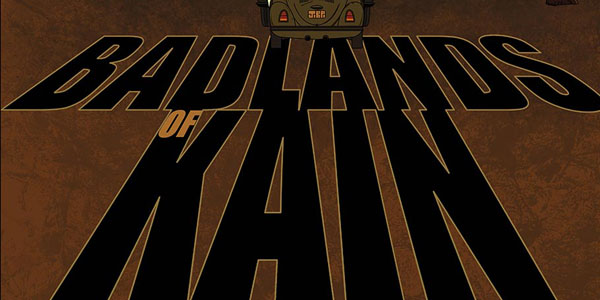 Director Andy Palmer a stopped in to to answer some questions classics films that influenced him and making his newest film, Badlands of Kain. 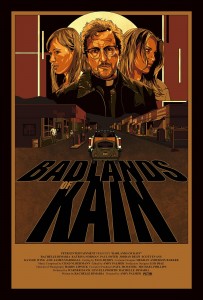 Kris (Katrina Norman) and Shannon (Rachelle Dimaria) decide to take a road trip to Arizona. While on the road their car “Lady Bug” takes a turn for the worse leaving the girls stranded on the side of the road in the middle of nowhere. Rescued by a tow truck driving preacher named Terry (Paul Soter) from Kain, the girls soon find out that once you arrive you can never leave Kain.

Once again a homage to old classics like Twilight Zone, Hitchcock, and a bit of The Sixth Sense rolled into one. The plot is full of twists keeping you guessing how it will end. Paul Soter and the rest of the cast balanced the thriller genre and real world of making the story believable.

Director Andy Palmer wove the twists and turns of the story creating a much needed break from traditional horrors and thrillers. The powerful story will keep viewers on the edge of their seats for most of the film. So before you plant yourself in front of the screen and enjoy this soon to be classic film, see what the director had to say about his love of horror and putting together the film.

Mike: With your success over the years of being a part of VH1 reality television what made you decide to take a chance and directing movies?

Andy: I’ve always wanted to work in film, ever since I was a little kid. We didn’t have cable, so I was a video store junkie. Our local store was called Rick’s Video, and I would stay in there for hours talking to the owner Rick about movies, he was way nicer to me than he needed to be, always willing to talk about films with me. In college I focused on editing, and that’s how I got into reality television was as an editor, but the end goal was always to direct. But I feel so fortunate to have started in and continuing to edit, it has made me a much faster and disciplined director.

Mike: Of your films Funhouse Massacre, and Badlands of Kain which would you say was your favorite filming?

Andy: Oh gosh, that’s like asking who is my favorite kid. I loved making both for different reasons. Funhouse was much more in my comfort zone, because of the comedy element, that is where I feel most at home. But it was extremely challenging because of the scope of the film vs. our budget. We had to absolutely fly to get that film in the can. Kain was much more challenging for me as a director, as I struggle more with building drama and suspense. But I love that, I love showing up to set a bit scared to see if I can rise to the challenge everyday.

Mike:Both Films pay homage to classic television and movies, What made you decide to do theses types of Films?

Andy:I think that again goes back to my video store driven up bringing. First and foremost I am a fan of movies. I am just constantly lost in the magic of them, so I try to tell stories that pay tribute to those films.

Mike:Will we see more of homage type movies from you in the future?

Andy: I think so. I speak in movie quotes I relate most of my life to movies and tv, so I think I’ll always in some way making homage’s to my favorite films. But as I get older and more seasoned and the projects become more passion project oriented, I hope to really develop my own visual style. I just saw The Big Short, and I look at the passion and care that Adam McKay put into that film, and thought it was just brilliant.

Andy: In sixth grade our local theater played a 10 p.m. screening of the original Halloween on Halloween night and my parents let me go. I was enthralled with it, and the effect it had on the audience. So for me, there’s no beating Michael Myers.

Andy: It’s a tie for me between “A Most Unusual Camera” where this group of crooks find a camera that takes pictures of the future and “Third from the Sun” which has this crazy twist at the end that I won’t give away. That show just blows me away as every episode could be a stand alone film. It’s amazing.

Mike: Before we let you go is there anything you wish to add?

Andy: I just want to say thank you so much to you and your fans, and that I hope they check out Badlands of Kain on VOD/DVD on April 5th and The Funhouse Massacre on June 7th.

Check out these great films you will not be disappointed. Thank you Andy for giving us a moment of your time.We look forward to more great films from you.