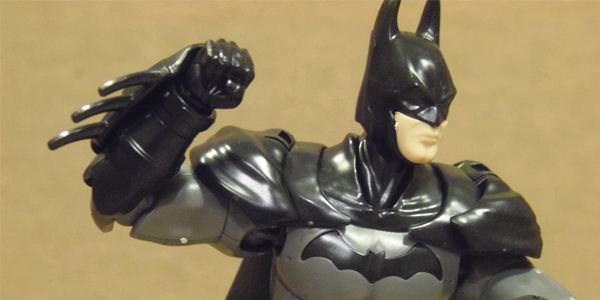 A welcome addition to the world of model kits, Arkham City Batman, along with The Dark Knight Rises Batman and Man of Steel, just became a poseable figural model kit. These five inch wonders of articulation are available at a local Toys R Us for about $19.99 each.  Although DC characters were mentioned, many other varieties of characters exist in this price range, including Halo characters. The level 1 kits are less articulated but just as detailed and include Batman’s arch nemesis The Joker. There is also a 54.99 Arkham Batman kit for those brave enough to build him. 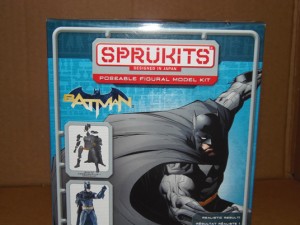 Half the adventure is the building process of putting Batman together. Given the difficulty about an hour is needed to complete the task. The detail work on each figure leaves little to do other than assemble them. Unlike Gundam kits, no painting is needed, except for the eyes, they could use a white or even red touch. Easy to follow instructions make it painless when piecing them together, not to mention the plastic breaks away easily with little to no left over that needs to be shaved down after removal. The set contains 95 pieces, including multiple hands, a grappling gun, and a batarang. The cape, made a thin plastic, reminds me of the old seventies style Star Wars capes. But make sure to take care when handling the cape, it has a tendency to crinkle easily.

Nicely detailed figures, and a fun building project to put them together, it’s hard not to like Bandai’s DC Sprukits. The hope is to see more DC characters joining Batman and the others on the shelf. Could there be a Justice League group in the works? Hopefully.