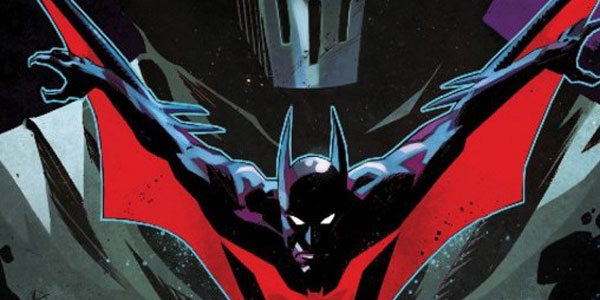 The question we  need to ask is WHY? Why this book?

In Batman Beyond Unlimited you get three stories in one book (Batman Beyond, Justice League Beyond, and Superman Beyond).

The current run of the Batman Beyond comic ends with the November digital issue and this month’s print issue, as writers Kyle Higgins and Alec Siegel let slip in an interview. The current arc will wrap up the story the duo has been telling about the futuristic version of the BTAS villain, Phantasm.

The book is apparently a victim (AGAIN) of DC’s crowded digital slate, but we might be able to see Terry and Bruce again at some point in the future as Higgins and Siegel plan to revisit the previous Justice Lords arc. This book also provides a great price point with the 3 stories for $3.99. In this market that is a PERFECT bargain for people who are struggling to support an industry that thrives on disposable income.

Yes I realize that the current DC stable is full of Batman, Superman, and Green Lantern titles, but there is NOTHING wrong with this book. At the shop I work at we cannot keep it on the shelves because of the value and its nostalgic readability! I will definitely miss Batman Beyond Unlimited in my monthly pull box. Maybe with the right pull we can get DC to change their minds sooner than later, as we did with the re-hiring of Gail Simone to Batgirl a few years ago.