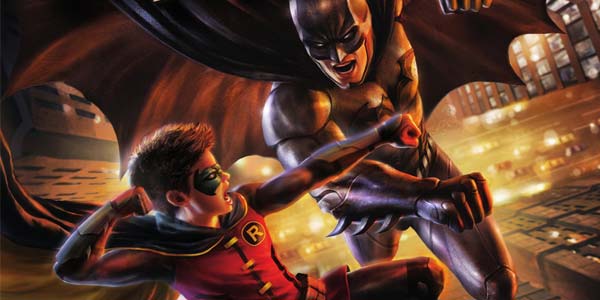 Batman vs Robin, the follow up to the DC Animated feature Son of Batman, can be added to a short list of sequels that surpassed the first.

Based off of Scott Snyder’s Court of Owls run in the New 52 comics, Batman vs Robin is action packed, visually stimulating, and pure fun to watch. It’s the story of a secret society, known as the Court of Owls, that tries to take control of Gotham by manipulating young Damian Wayne against his father. Damian is caught between two opposing forces: His father’s vision of him and that of Ra’s Al Ghul, who still influences him… and the mysterious Talon tries to take advantage of this fact. There are a lot of nods to the comic but this story does go its own way during the film. You can feel Damian’s struggle as he tries to walk the line of justice versus vengeance.

The animation, fight sequences, music and voices in this movie are nothing less than outstanding. Jason O’Mara comes back as Batman/Bruce Wayne and still does an amazing job. Kevin Conroy plays Thomas Wayne in a flashback for all of us nostalgic Bat-fans to enjoy. Stuart Allen is back as Robin/Damian Wayne and delivers a very good reprisal of his role from Son of Batman. The surprise voice in the movie was Weird Al as the Doll Maker.  The movie doesn’t shy away at all from having gruesome, even terrifying scenes and can quickly switch to more exotic and beautiful settings while maintaining a Gotham-like atmosphere: Fear, depression, corruption, darkness and a glimmer of hope all at the same time. This film holds true to its PG-13 rating, with blood, violence, and innuendos that may make it hard for parents to allow kids to watch this.

A few really good Easter eggs are planted throughout the movie as well: When Damian looks up Doll-Maker’s bio on the Bat Computer, you can see a certain funny villain as a known associate.  The code that Batman entesr to hide the weapon is 1939 (the debut year of Bats).  And Dick’s background on the telephone features a certain red-haired bat-family member (which I found weird since he wasn’t talking to her on the phone). A nod to pre New 52 story Batman #666 was also a nice addition.

Some of the Blu-Ray features include “The Mythic Court of Owls” featurette, “The Talons of the Owls” featurette,  four bonus cartoons from the DC Comics vault, and a sneak peak of the next animated feature Justice League: Gods & Monsters. If you purchased the Blu-Ray combo pack you also got a mini PVC statue of Batman.