Episode 3 starts off slow but stay with it as it really has some HUGE moments that made this Batman fan say, HOLY PLOT TWIST BATMAN!”.

With Episode 3 I turned on the “Crowd Play” function which sends a link with a pass code and allows other people to watch the game play and give you a thumbs up or thumbs down based on the choices you make in the game. I had about 3-5 people watching at a certain time. The feedback I got from the people watching with this option was positive except for one who said the feed was choppy on his end.

We start this chapter at the hospital walking with Selena to visit Harvey post accident from Episode 2. You start to see the struggle of Harvey Dent during this monologue (which also happens to be the slowest point of this episode). As Bruce is talking to Harvey there is a strange light in the sky coming from GCPD. It was kind of cool to be able to control Batman’s feelings on Jim Gordon’s Bat-beeper. 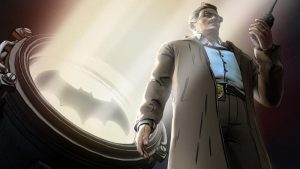 Your time as both Batman and Bruce is evenly split as you play out a scene where Bruce is told he must step down as CEO of his company in light of the evidence against his family.

You are also again faced with a choice in the game to go help Detective Montoya or help Harvey who fled the hospital to get to his speech. Also you do some pretty in depth detective work on a plan for the Children of Arkham to distribute this mysterious toxin via the Gotham Skyrail. It is here during this investigation we see the leader of the Children of Arkham and you end up battling and getting your proverbial butt handed to you and being saved by Catwoman.

This next scene was pretty intense as you find yourself in Selena’s apartment and things start to get real after she helps with Batman’s wounds. You have the opportunity to start getting frisky with Catwoman and judging by the post episode poll results I was part of the less than 10% to keep it professional (due to my kids being in the room LOL). I will definitly replay this episode to see how it could have gone. 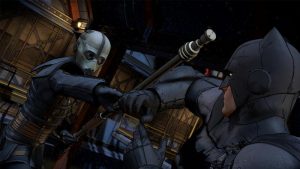 The ending of this episode will leave you with your mouth wide open. At Bruce’s resignation press conference you are betrayed by someone who in the Batman lore is an ally. It is with that betrayal we fade to black and await episode 4 which is due out this month in November.

JQ gives Episode 3: New World Order a 8/10. There are a few BIG moments in this episode, we see the true emergence of Big Bad Harv, the blossoming romance between Selena and Bruce, the betrayal of the Wayne board of directors, and much more.