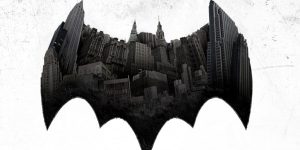 The fourth episode in this series of five is now available to download and play on your gaming system. And what a wild ride it is! 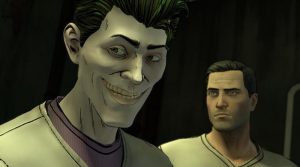 Before we get started let me tell you that depending how you played the third episode will SERIOUSLY determine how episode four plays out. In fact, I replayed both chapters to see and yes it was like a totally different game. That aspect alone made me respect this game on a whole new level for it’s replay value.

We last left the game with Bruce being drugged by Viki Vale aka Lady Arkham and Bruce pummeling Penguin at the podium, which brings us to the start of episode four where we find Bruce inside a brick cell inside of Arkham Asylum. The orderly is paid to have a few unwanted guests welcome Bruce, and as he is still not well from being drugged, these thugs get the best of him. However this is where it gets interesting– Bruce is then helped by a fellow inmate, who calls himself John Doe. After seeing John’s appearance, everyone knows who this guy is… it’s the Joker.

The doctor walks in after the fight and she escorts you and John Doe to the recreation room, where we see other famous rouges, Mr. Zaasz and the Ventriloquist. After some dialogue and some TV time with Doe, he gives you an ultimatum for his help. From the looks of things Joker and Batman have not met and you have to accept his offer or stop Zaasz from murdering another inmate. After the scuffle Bruce is considered a liability in the asylum and is released to Alfred.

Harvey Dent is full of hatred for Bruce and is very upset that he gets out of Arkham. Dent has enacted Martial Law and with the affects of the drug still in Bruce’s system he is not himself during a routine traffic stop. Back in the Batcave you use some detective skills to synthesize an antidote to counter the drug. This ends your time as Bruce (if you choose, later the option is given to work as Batman or as Bruce Wayne).

Batman takes some of the leads given to him by John Doe to locate Viki Vale (who has gone missing) and winds up at a crime scene and you again have to use the detective skills to help solve it. After this encounter you have to go back to the cave to figure out why your tech is still acting up. Once you get to the bottom of it you are given the choice to have a face to face (yes pun intended) with Two-Face as either Batman or Bruce. 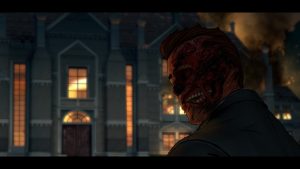 After your encounter with Two-Face you have another talk with Gordon which leads you to the closing act boss battle. Here you are given two options again– face off with the Penguin to protect Batman’s secrets, or intercept Two-Face who is going to Wayne Manor to destroy it. I chose to stop Penguin and without spoilers, the victory and consequence of that action made for an amazing and intense ending to the episode.

I have really enjoyed this game so far and am looking forward to completing the episodes to see if Bruce can clear his name. This game can run dialogue heavy sometimes, but it is a great story with action that makes up for some of the slow points.