Batman: Through the Looking Glass – Review 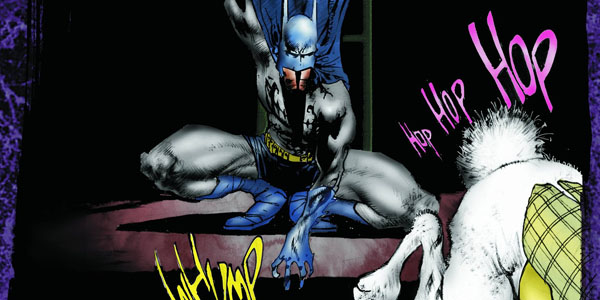 Much like Lee Bermejo’s recent graphic novel “Batman Noel”, “Batman: Through the Looking Glass” takes a classic piece of literature and uses it as a foundation on which to build an engrossing Batman tale.  The book, from writer Bruce Jones and artist Sam Kieth, is a worthy purchase for any fan of unorthodox Batman tales (i.e. Grant Morrison’s “Arkham Asylum: A Serious House on Serious Earth). 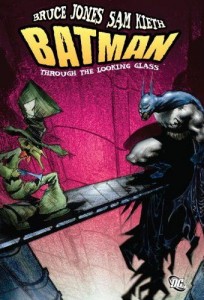 Lewis Carroll’s “Alice’s Adventures in Wonderland,” the timeless children’s tale about a young girl who travels down a rabbit hole to a strange world full of even stranger creatures including a white rabbit wearing a sport-coat and a talking, hookah-smoking caterpillar, serves as the inspiration for the graphic novel.  In fact, it starts off in almost exactly the same way.  Batman, suffering from an intense headache, is talking with Alfred and reading a newspaper headline that announces the death of a prominent politician.  Clearly not in his right mind, Batman then sees a childhood friend named Celia (an anagram for Alice) who died young and whose death has plagued Bruce ever since.  This apparition guides Batman down the rabbit hole and into Wonderland, which is actually Gotham City as seen through Batman’s drug-addled vision (Bruce Wayne attended a party the previous night hosted by Judge Rosalyn Hart and was inadvertently given a drugged meal).  The story is a mystery at heart and revealing any more would give it away, but know that the narrative involves everything that a Batman story should; a great villain origin story (you can probably guess which one), a damsel in distress and a new way of delivering a fairly standard tale of political intrigue in Gotham.

Calling the book unique would almost be an understatement…it’s downright bizarre.  Framing a tale of the Dark Knight with a children’s fantasy was an odd choice, but Bruce Jones managed to write a story that fits perfectly in Batman’s canon and reveals yet another psychological burden that he’s been carrying around for most of his life (the death of Celia).  Jones successfully runs a number of storylines parallel to one another; Batman investigates the murders of high-profile politicians while Alfred and Robin pursue him through the sewer system that the Mad Hatter has set up as his own personal playground.  If the only focus of the book was the murder mystery, it would be run-of-the-mill and forgettable.  The real angle is the way Batman investigates it while hallucinating and leading the reader through his twisted mindscape. 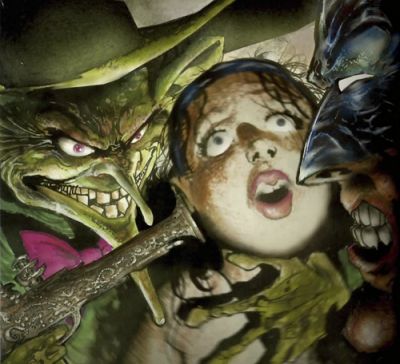 Sam Kieth’s artwork truly elevates this book to a level beyond typical Batman fare.  Most famous for creating, writing and penciling his own series The Maxx in the early 90s, his artwork is truly one-of-a-kind.  It constantly jumps between being insanely detailed and almost childishly basic while always retaining a distinct and likeable style.  His vision of Batman and his world is like nothing I’ve ever seen; it is truly refreshing.  The colors by David Baron are reminiscent of Batman’s much earlier (and less gray adventures), further lending an almost fairy-tale quality to the book.  This is an overall charming and enjoyable graphic novel that deserves a read from Batman fans old and new.