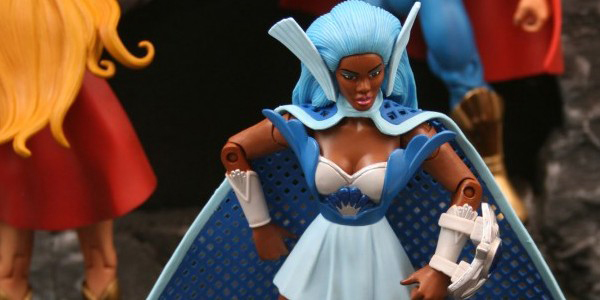 Princess of Power has had scant offerings as of late, but curiously, fans waiting for Glimmer or Castaspella will have to wait a little longer. It appears Mattel is jumping from A-lister to tail-ender. After Frosta, the next one on the list is the Captivating Beauty of Etheria, Netossa. She has her limitations, but in the end, she is a strong addition to the Great Rebellion. 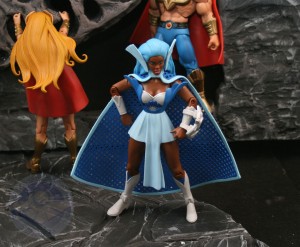 Netossa starts 2013 on a good note. She is an amazing sculpt from head to toe. The approach of the Four Horsemen is a great one: FilMation designs and colors with vintage toy details to plus-up the otherwise plain cartoon aesthetics. As far as colors go, her blues are bright and vibrant, and her white is WHITE– a very strict following of the original paint master. It hurts that Frosta is comparatively drab, but it shows Mattel Design is listening and learning, so that helps. Netossa comes with her cape that doubles as a net (albeit it is really only a cape) and comes with the standard PoP shield in white, silver, and with a blue gem. She had no issues I could see. Even the heavy black dot “wash” centered on the blue cape everyone has reported having is practically non-existent on my cape, so I was a fortunate one. Her hair and face are among the most beautiful I have ever seen. Her wig was glued on straight. Her scalloped fringe was attached to the sides of her hair and separated from the choker so she can maintain head movement while her scallops can stay upright. I understand the approach of the design.

The only issues that arise are in the subtleties. Her FilMation head is different from her toy head in that she doesn’t wear a face plate. The design choice to omit that was something few fans can forgive and I can understand the sentiment. The face plate was an important aspect of the toy, and with a price increase to $25 left fans thinking that all the details would remain intact– in reality, she only has her shield. It would have been great to get her card back sword, face plate, or some other new weapon to put her on the offense. She would have also benefited from changing all the baby blue to silver, to complete her metallic look. The baby blue was FilMation’s answer to silver in the series, and unfortunately the Four Horsemen translated the color too literally. 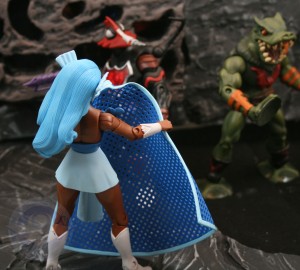 The other issue is the execution of her gimmick, the cape.  Since it took a whole tool, it took a good amount of the tooling budget (why that was specifically cited for her and not others like King Randor, Scareglow, etc remains to be seen).  Made of plastic, like Leech’s net, the accessory maintains its shape as a cape, and has great difficulty functioning as a weaponized net… you’d really need your imagination. It’s hard for me to fathom that a fabric net would look out of place next to a flocked MossMan, a rooted Megator head, or a vac-metal Hurricane Hordak, but it appears fashion triumphed over function.

The other issue is that removing that net to use as a weapon is dangerous. For me, Netossa’s neck cracked a bit when popping off the head, so have a blow dryer ready (she came out of a cold car beforehand). From a visual perspective, her scallops remain on her head floating aimlessly when the cape is off, when in fact they are supposed to appear to be attached to the choker. It shatters the illusion. Ironically, the thing that could have saved her was the face plate, where the fringe appears coming off of the face plate on the toy, not the choker. Visually, the cape can never come off, or it throws the look off, which in turn is antithetical to what they wanted to do. Better choices could have been made.

So this month is one where Netossa’s strength in her beautiful sculpt outweighs the limitations in accessories and design. It was nice to see fans who were indifferent to her warming up when she was in their hands. She is truly an outstanding figure to diversify one’s shelf. Netossa was also given a ton of new outfit parts ready for re-use with Peekablue. We have been promised to be given a card back sword in the next Weapons Pak, so accessories are coming. A face plate and a functional net/cape could have propelled her from good to great. however, after the fiasco with Frosta, I will be just fine with this “good” addition to the Masters of the Universe Classics collection.