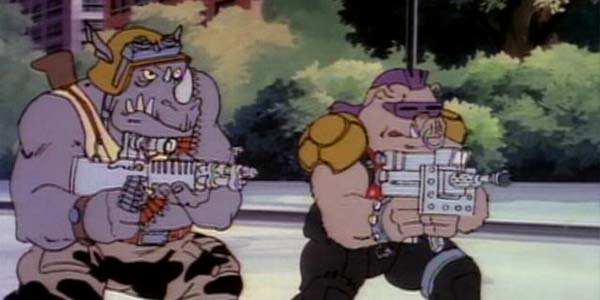 Mutants and more are on tap to join the Ninja Turtles sequel.

The next Ninja Turtles movie won’t be out until 2016, but it’s kind of going to be a 2014 mashup– a direct sequel to this year’s reboot, which will replace departing director Jonathan Liebesman with David Green, whose Earth To Echo was actually one of the gems of 2014’s summer movie crop.

But the retro nature of Ninja Turtles 2 will get more retro than two summers previous… according to this piece on Collider, the movie is set to introduce Bebop and Rocksteady among its new characters.  The evil mutant warthog and rhino are among the Turtles’ most iconic foes, which is funny because– as I mentioned previously— they really haven’t been in many incarnations of the oft-rebooted TMNT franchise.  But in the new movie, they will most likely* be, according to the film’s producers:

“We can say that Bebop and Rocksteady are in the film, and Casey Jones is a character that we love and we’re trying to fit him in as well”

I don’t have much of a dog in this fight (mutant dog or otherwise); I pretty much nothing-ed the extremely middle of the road new Turtles movie, and while I’m happy to see Green land what must be a decent paycheck, I’d be just as happy seeing him do something more original like Echo.
Bebop and Rocksteady and Casey Jones are cool and all, but me personally? I’d be just as okay with Nickelodeon’s animated series remaining our only TMNT franchise these days, because they’re getting it pretty much right.
Source: Collider
*It should be noted, Bebop and Rocksteady were also originally planned for 2014’s Ninja Turtles, but were cut during the production process.