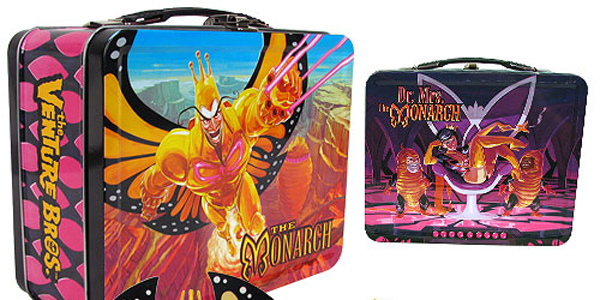 Witness the Death’s Head Panoply!  And a lunch box!!

Entertainment Earth is in the process of unveiling their San Diego Comic Con exclusives, and the latest is a truly rad retro style Venture Bros set.  Two years ago, Bif Bang Pow! released a retro style two-pack of figures– Dr. Jonas Venture and Rusty the boy adventurer– in a tin lunchbox that I still use to this day.  Now, it looks like I’ll have some competition, because they’re bringing the lunch box packaging concept back for 2013!

This year’s exclusive set includes new variants of The Monarch (in his Death’s Head Panoply battle armor, from the epic Season Three finale), as well as Dr. Mrs. The Monarch.  The set also includes in-scale figures of Kevin and Tim-Tom, Dr. MTM’s diminutive and absurdly creepy henchmen, in their larvae costumes.  And to make it even cooler, the whole set comes packed in a wicked cool new Monarch-themed “tin tote” (nee, lunchbox), guaranteeing that if nothing else, BBP wins Comic Con for coolest– and most useful– packaging.

The set will be available at Entertainment Earth’s booth at Comic Con, and they are currently taking preorders on their website for non-attendees.  I’m not entirely sure what they mean by “If supplies remain, your order will be filled and shipped to you after the event, during the last week of July 2013,” but I’m hoping like hell my pre-order gets honored, because I want the HELL out of this thing. 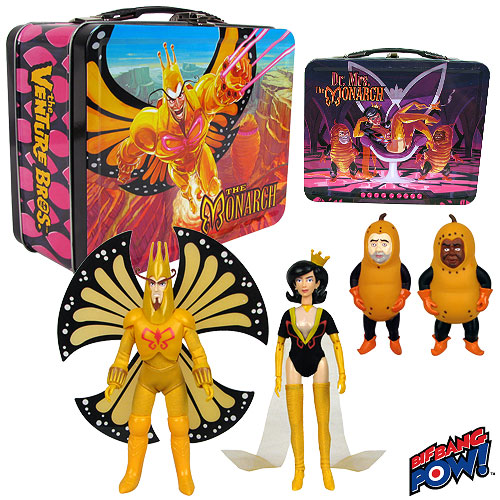