How Big Are NECA’s AvP Predators? 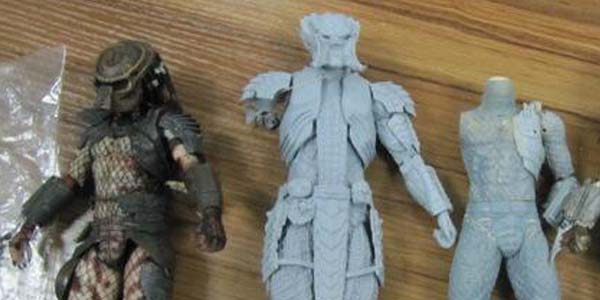 They’re a little taller than the Jungle Hunter.  As they should be (I think).

It’s sometimes crazy what will cause a dustup on the internet.  Case in point, the small frenzy that rose out of the behind-the-scenes size comparison photo NECA shared earlier today, which shows the upcoming AvP Predators– insanely detailed, all new sculpts with added articulation– will measure up about 10% larger than the classic Predator figures released in the past.

You can see the size comparison for yourself here:

Special BTS size comparison for #Prednesday as we work on the tooling details of the AvP Preds coming late Summer pic.twitter.com/JFDPBEJpwc

Any controversy over this size seems mind bogglingly nit-picky to me.  I’ve never been much of a scale Nazi, but I’ll readily admit I was annoyed by Mattel’s shrimpy first Sinestro or Hasbro’s new 6″ scale Boushh Leia (who measures almost a half inch taller than the previous Leia figure)… but the difference between the Predators not only feels correct to me*, it helps to change up the samey look of NECA’s ever-growing army of hunters.

If anything, I feel the new size only serves to potentially hurt NECA, who have now complicated the reuse potential of these new bodies, simply for the sake of intended screen accuracy.  I’d say the bigger outcry should be why characters from arguably the worst Predator movie (and that’s saying something– a real race to the bottom, this film franchise is) should be the first released on new, more detailed and more poseable bodies.  Actually scratch that– there should be no outcry, because we’re getting the opportunity to buy highly detailed, super poseable, film accurate renditions of three new Predator characters… for Predator collectors, we should probably leave it at that and celebrate this as a good thing.

*Full disclosure– I feel the REAL right call here, for the sake of journalistic integrity, would be to rewatch AvP to compare the height of the Predators.  But that movie is a piece of shit, and I wouldn’t wish a viewing of it on my worst enemy.  I’ll stick to my pontificating and likely biased yellow journalism when it comes to this issue, thank you very much.