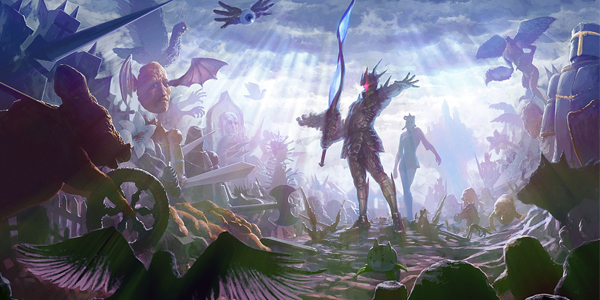 By now, you should have an inkling of the insanity that awaits you in a Suda51 creation.  He and his development studio, Grasshopper Manufacture, have gained a reputation for their unique artistic approach and a penchant for the bizarre that can be seen in every aspect of their products.  Their latest release, Black Knight Sword, is filled with all the quirkiness, craziness, and graphic violence you’d expect from a Suda51 title, with gameplay that captures the charm of the old-school platformers we all love.

Steeped in a macabre world that’s equal parts wacky and disturbing, Black Knight Sword revels in its own grim absurdity.  Narrated as if it were a creepy children’s fairytale and presented like a stageshow filled with demonic marionettes, the game begins as a hanged man’s corpse is imbued with a powerful spirit, re-animating him as the Black Knight.  Keeping with the same theater backdrop, with curtains hung on either side, the game comes to life using 2D sprites made to resemble cardboard cutouts and backgrounds that move as if they are being handled by stagehands.  It’s a rather creative way to frame the adventure and one that I really enjoyed.  The layered 2D effect is almost like watching a hellish incarnations of Terry Gilliam’s animation work from Monty Python’s Flying Circus. 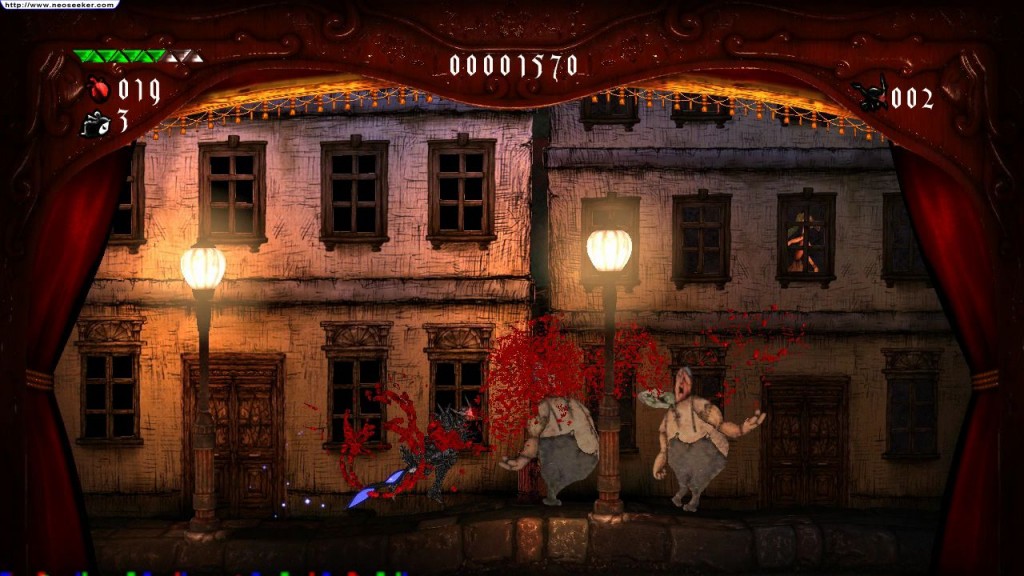 As the Black Knight, you set off on an adventure to rid the world of an evil princess and her minions that harkens back to titles like Castlevania and Ghouls‘n Ghosts, both in their simplistic control schemes and sometimes punishing difficulty level.  While you can trade in human hearts as currency to caged, floating eyeballs to gain new moves (I told you it was insane), your primary attack is rather lackluster.  The Black Knight can stab rapidly with his glowing sword, but must stop moving to do so.  It seems like an archaic gaming mechanic, but one that was likely implemented to purposely ramp up the challenge.  This is only exacerbated by enemy movement which, unlike many similar titles, isn’t always predictable and can make strategizing difficult.  You can also double jump using two taps of the assigned button, which you will be doing a lot of.  The platforming sections are plentiful but I didn’t find them to be overly laborious to traverse.  In fact, this aspect of the controls and gameplay seems tight and spot-on. 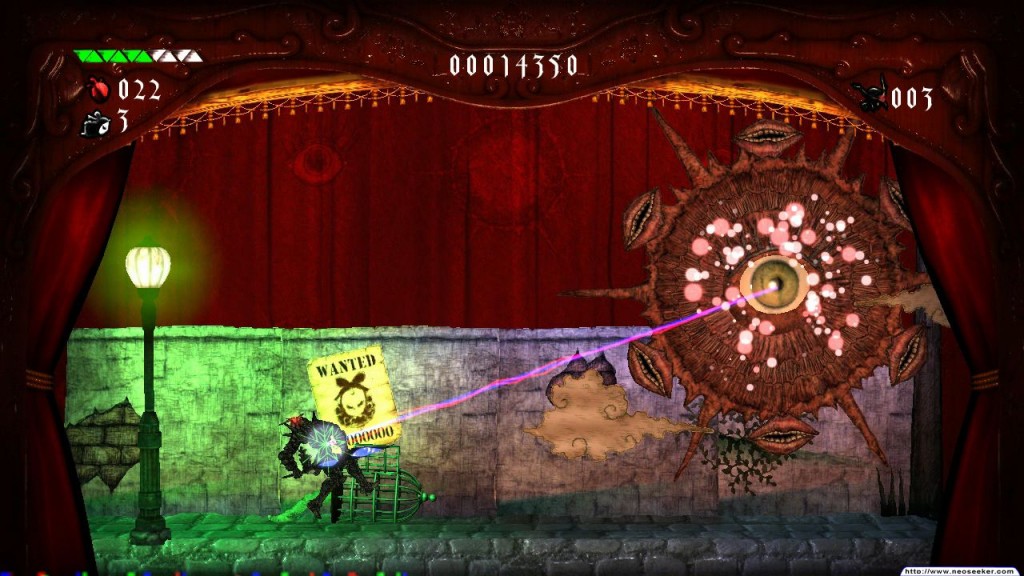 Along the way, you’ll encounter “Cat Head Grass” collectibles which are, literally, cute cat heads growing out of potted plants, and microwave ovens filled with hearts.  You’ll find yourself spending most of your time, however, slaying endless baddies in the form of rotted walking heads, chickens that breath fire, and a host of other monsters who are as amusing as they are disgusting – all of whom explode into a comical geyser of blood when defeated.  Checkpoints are scattered around the levels and are activated by passing through them, but this will not autosave your progress.  Instead, especially on the higher difficulty levels, it’s important to save manually so you can restart at the closest checkpoint rather than start the entire level upon your death — and, if your playing on any difficulty level other than “easy”, you will die many, many times.  The boss encounters, especially the final boss, can test your patience and may result in broken controllers.  On “easy” though, much of the game is a cakewalk — there is a giant challenge gap between the difficulty options, although more do unlock once you’ve played through the game once. 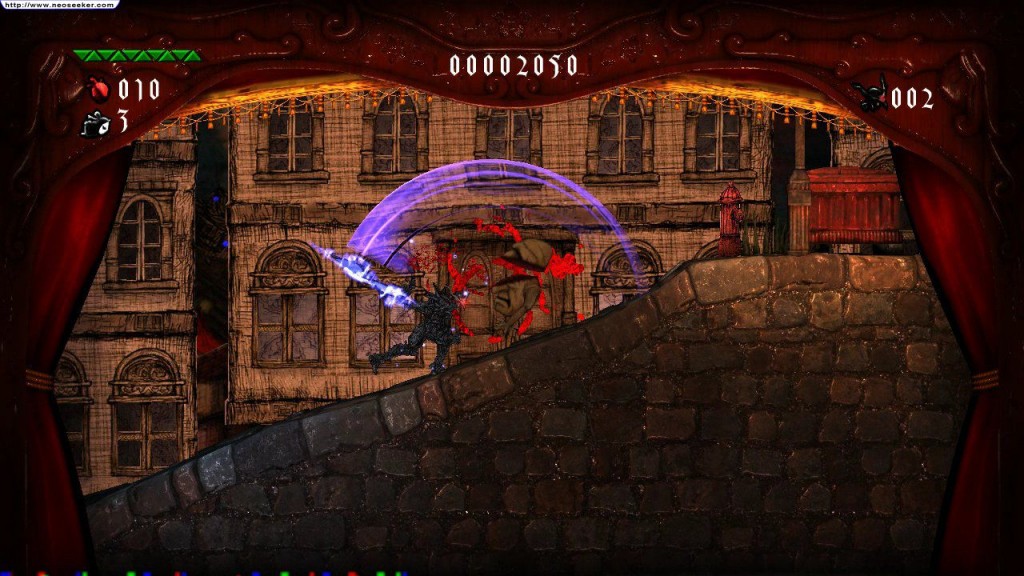 The repetition of the combat does were thin after several levels but, fortunately, the developers tried to vary up the environments a bit to keep players on their toes.  Sure “rising water” levels that force players to navigate the stage vertically have been done plenty of times, but it was great to see the game get flipped on its head for a brief bit of “bullet hell/shmup” gaming — this is, after all, the developer behind the bullet hell masterpiece, Sine Mora. 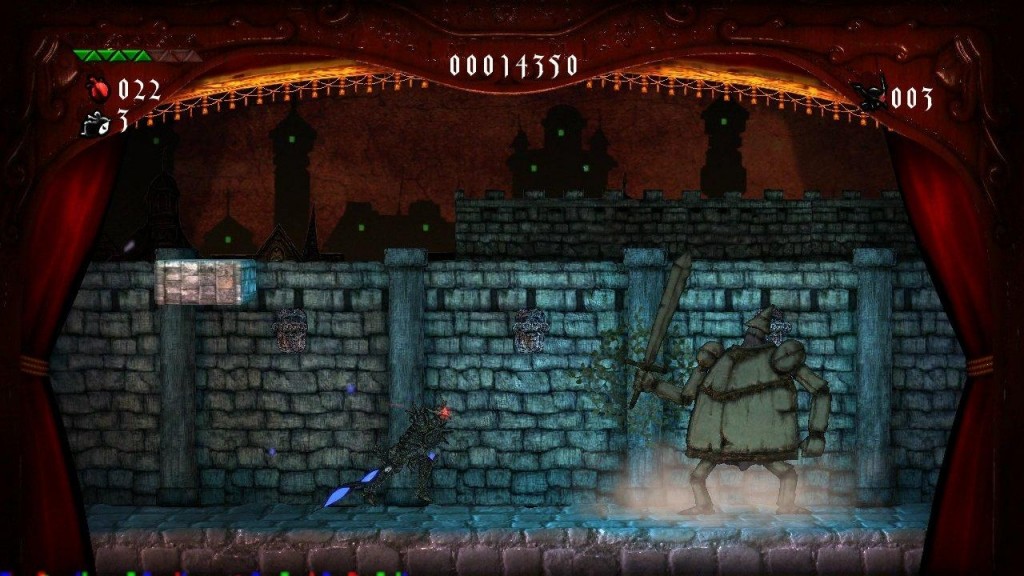 Available now on XBLA and PSN for 800 Microsoft points or $9.99 respectively, Black Knight Sword is great fun and is worth the price of admission simply to marvel at the unique art direction.  Thankfully, while flawed, the game offers more than enough content to justify the price tag and is a genuinely nostalgic trip down memory lane for gamers old enough to remember when challenging 2D platformers were all the rage.