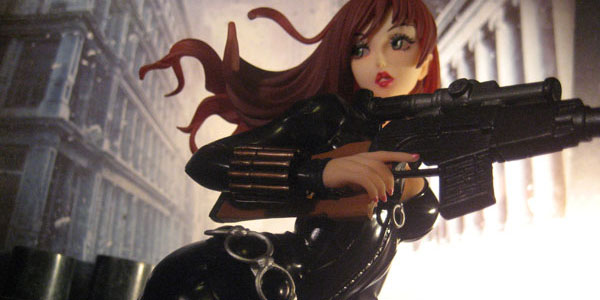 The most recent addition to the excellent Marvel Bishoujo collection from Kotobukiya is a new take on Black Widow, and the iconic Avenger’s new version is one of their best pieces yet.  The Covert Ops edition of Black Widow brings the sexy, stealthy heroine to life in what should be the centerpiece of any Avengers or Daredevil display.

One of the earliest statues in Kotobukiya’s Marvel Bishoujo collection was the Black Widow, who struck a mean pose and sold out quickly.  Between the ever-increasing secondary market price of the original and the recent switch from 6″ to 8″ scale in their Bishoujo series, Kotobukiya decided it was time for an update on Marvel’s sexy super spy. 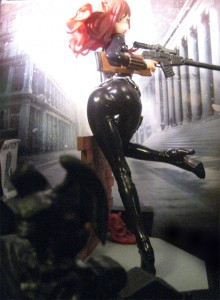 The new Black Widow is in the current 8″ scale of Kotobukiya’s various Bishoujo lines, and she’s a fantastic figure, as well as a testament to how far the company has advanced throughout the years since the release of the original Black Widow Bishoujo.  The new Natasha features the spy in a mid-running pose, about to leap over a brick wall as she makes her escape from her latest mission. My favorite aspect of Black Widow is the wonderful sense of fluid motion created in this sculpt– from the arch of her back to the natural running pose f her legs, to her over-the-shoulder look back at her pursuers, this take on Widow is absolutely packed with kinetic energy– I can’t stop looking at the figure and expect to see her finish her stride and leap over the brick wall to safety!

In addition to the perfectly-executed body pose, Black Widow also features an immaculate sculpt, full of details, especially the various folds and slight bunches in her bodysuit. There is a great sense of depth to her frame underneath the uniform, but an equal sense that, while form-fitting, her costume is more practical and less skin-tight than the other more traditional super hero outfits seen on many of her fellow Bishoujo statues.  The excellent paint job helps accentuate the figure as well, with a gloss finish on her black uniform that suggests a latex or patent leather texture (similar to Koto’s wonderful execution on the DC Bishoujo Catwoman), and this contrasts nicely with the weathered metal finish on Natasha’s gold bracelets and the ammo belt wrapped around her thigh. 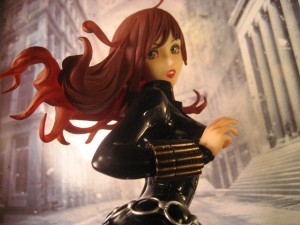 Black Widow of course features another great Bishoujo, or “pretty girl” portrait based on a design by master artist Shunya Yamashita, and the determined (yet possibly in over her head) look on Natasha’s face suits the character perfectly. Another great element to this piece is the alternate hand included– Kotobukiya has been using alternate parts for customizable displays for a long time in their Art FX+ statue series, and I am very pleased to see that surface in the Bishoujo collection as well. Black Widow includes a right hand that is open, as well as a swappable second hand brandishing her signature sniper rifle, which is packed with just as much detail as the figure itself. The two hands can switch back and forth with ease, although honestly the rifle is done so well I can’t imagine anyone opting against including this hand in their display piece. 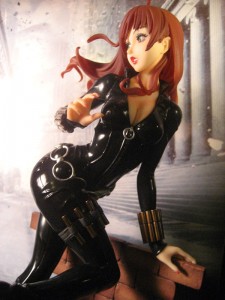 Bases have been kind of all over the place in the Bishoujo collection, ranging from simple clear stands to fully sculpted sets like Invisible Woman’s Moleoid Hand display. Natasha features a happy medium, with a fairl generic grey octagonal base, which holds the figure very well, along with the brick wall incorporated into her pose. The bricks are sculpted and painted quite authentically, and adds greatly to the overall look (while also providing a bit more support for the running Widow).  The set also includes one last piece, a crumpled Daredevil mask which can be propped up against the brick wall. This is a great little nod to Natasha’s romantic history with the hero, and the red of the mask stands out brilliantly against the grey base and Widow’s black bodysuit.

There were more than a few times I was tempted to pick up the original Black Widow Bishoujo at an inflated second market price, because she looked good and Natasha is my favorite Marvel super heroine. In retrospect I’m glad I waited, because this new version is an improvement in every way possible. If you’re a fan of Bishoujo art in general, or Kotobukiya’s collection, Black Widow is a must-own, and one of the finest pieces they’ve done.  Even those not familiar with Bishoujo styling should take a look– Black Widow would make a great addition to any Avengers, Daredevil or Marvel collection you may have.

Thanks to Kotobukiya for giving us the chance to take an up-close look at the Black Widow Bishoujo!  Click Here to visit Kotobukiya online, where you can place your order for Widow or many more of their fine products.

(Click any thumbnail below to see full sized image) 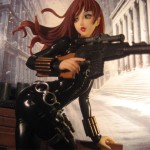 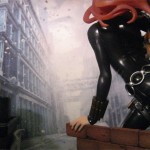 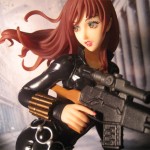 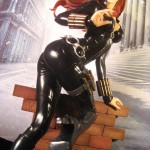 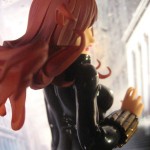 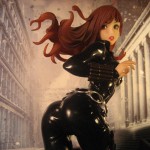 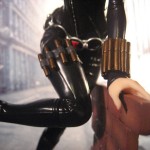 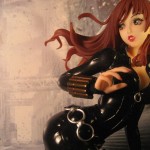 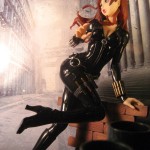 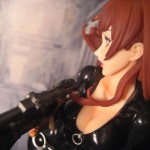 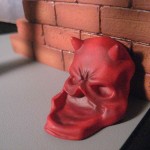 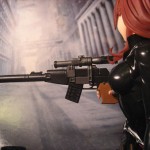 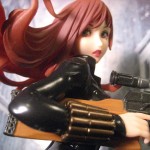 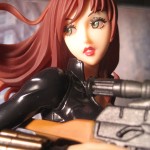 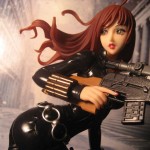 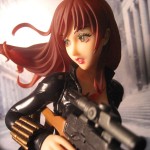 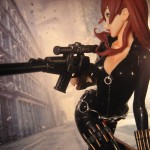 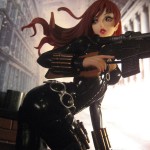 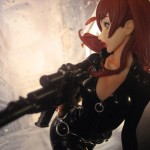