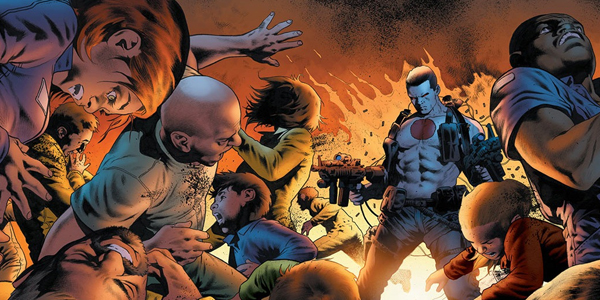 After last month’s intense cliffhanger endings, fans have been waiting with baited breath to find out what fate has in store for our heroes.  This Wednesday, October 10th, one day prior to their appearance at New York Comic Con, Valiant delivers the goods and then some in Bloodshot #4 and Archer & Armstrong #3 – two books that, despite my exceedingly high expectations, continue to impress the hell out of me. 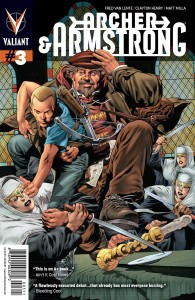 Merely three issues in, Archer & Armstrong is, without a doubt, the greatest title to emerge in comics this year.  Writer Fred Van Lente has retooled an already great franchise into something truly amazing, packed to the brim with wit, humor, and adventure.  Each issue has taken readers on a rollercoaster ride of action and absurdity, yet leaves you feeling like the fun is still only just ramping up.  In Archer & Armstrong #3, we get to see the duo tangle with new foes and old friends alike as it’s revealed that the Dominion’s plans were much more far-reaching than we had previously thought.  Obadiah’s crush, Mary-Maria, has been recruited into the Sisters of Perpetual Darkness, who we saw briefly at the end of the last issue, as she and the rest of the Archer clan have been sent out into the world to recover the remaining pieces of the all-powerful Boon.  From start to finish, this issue runs the gamut from all-out action, to laugh-out-loud comedy, to loss and tragedy, ultimately leading to Archer procuring his signature weapon and the pair left with clear direction in a desperate situation.

It’s not just the spot-on writing that makes this book so enjoyable though.  Clayton Henry’s artwork has been consistently phenomenal and his ability to perfectly convey both Obadiah’s youthful innocence and Armstrong’s charmingly crude qualities though expressions and mannerisms is second to none.  On top of that, the roster of unique cults and secret societies present throughout lends itself to some of the greatest and most imaginative character designs in recent memory — I want to see people cosplaying as ninja nuns and Sect guards stat.  Keep in mind that, beginning in issue #5 this December, the equally talented Emanuela Lupacchino will be taking over art duties for the next story arc, in which the Eternal Warrior will make his much-anticipated debut.  Very big things are on the horizon that shouldn’t be missed  (Van Lente actually gave us some excellent insight on what to expect in the series’ near future during our recent discussion here.) 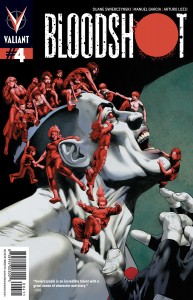 When we last saw Bloodshot, he had just eaten a bullet at close range.  Normally, the nanites coursing through his bloodstream would patch him up in with the quickness — problem is, another one of Project Rising Spirit’s lethal human experiments, codenamed “Pulse,” had just knocked out all electronic devices for miles with and EMP, including those microscopic machines in Bloodshot’s veins.  Before we get to Bloodshot’s current predicament however, we’re first treated (as we were in prior issues) to a beautifully illustrated flashback sequence showing our hero in a rather odd scenario, leaving piles of bodies in his wake.  Writer Duane Swierczynski takes a very careful and strategic approach to storytelling, feeding the information-hungry reader only tiny bits of pertinent information at a time.  Rarely do you know any more about Bloodshot’s situation than the character himself, which goes a long way in helping to identify with what he’s going through.  At this point, it seems clear that Project Rising Spirit custom-built Bloodshot to be one of the world’s most dangerous weapons, implanted him with memories of fabricated lives, and used him to carry out some horrifyingly destructive secret operations.  While their reasons and motivations are still largely unknown, so too is Bloodshot’s true identity, and we’re along for the ride as he tries to unravel the mystery.  By the end of issue #6 though, an unlikely alliance is made and we get a feel that Bloodshot is confident in his next move — taking the fight directly to PRS.  I get the impression that the action is about to explode in the very near future as, in the issue’s final pages, Bloodshot looks prepped to kick some serious ass.

The relaunched Bloodshot is a consistently brilliant and faced-paced read, filled with fun sci-fi elements, fantastic visuals, and plenty of surprises that keep it in a class all its own.  Do yourself a favor and check it out.  In the meantime, take a look at some preview pages below from both Archer & Armstrong #3 and Bloodshot #4.  Fans of the now 20-year-old classic series will also be pleased to know that Valiant will be releasing a hardcover collection of 1992‘s Bloodshot #1-8 later this month on October 24th.  (Sweet!)  And remember to check out their booth and panel at NYCC next weekend to pick up some con exclusives and get them signed by the creators.