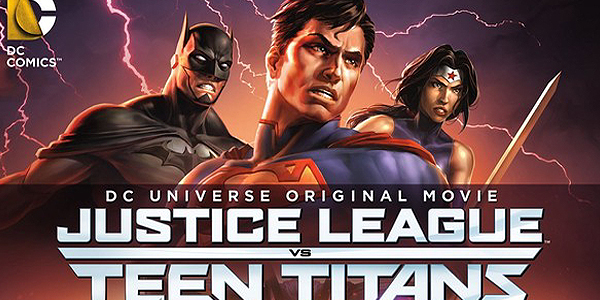 Special Features of Warner Animation’s latest presents a slightly mixed bag of hits and misses with the casual fan in mind.

Special features are, in many respects, for a particular kind of home viewer. Some consumers like their home video purchase to be chock full of featurettes, interactive games, additional shorts, and a variety of other value-add goodies. Other consumers, on the other hand, prefer their special features to be in tune with the feature presentation itself, adding supplemental information that new and old fans can ascertain enjoyment from. The special features section of Warner Animation and DC Entertainment’s blu-ray port of Justice League vs. Teen Titans straddles the line between the two aforementioned consumer base – although it could have been a bit more fine-tuned than its final product winds up being.

The special features section is kicked off with Growing Up Titan, a nicely done history of the Titans. Featuring sit-down interviews with Titans stalwart Marv Wolfman, Dan DiDio, and DC mainstay Mike Carlin, the mini-documentary touches on everything a newbie to the Titans would need to know. Starting from the dawn of the young sidekick to the formation of the Teen Titans in the face of the realness of the ’60s and ’70s effortlessly, Growing Up Titan is a cool segment that will feel like a trip down memory lane for old school Titans fans.

The two segments that follow Growing Up Titan are short vignettes giving viewers a bit of an understanding of the backgrounds of both Raven and Trigon, arguably the two primary forces of the feature presentation itself. Warner and DC have been utilizing these kinds of segments, which they call Heroes and Villains, off and on for some time now and they do more to feed into the story of the feature presentation than anything else. For new fans they do make for a solid enough primer on both characters and their eternal struggle but are somewhat expendable as, unlike the featurette that preceded them, they add nothing to the total package.

There’s the obligatory sneak peek trailer for an upcoming DC Entertainment direct-to-video presentation, in this case the upcoming Batman: The Killing Joke adaptation. While this featurette has been circulating on the internet for a few weeks now it is still a cool bit of viewing as they are really capturing the look and feel of the iconic tale.

Then there’s the misstep. Not a huge misstep, mind you, but a misstep nonetheless.

Rounding out the special features are two episodes of two different animated series that the people putting together these special features thought were in line with the feature presentation. The first episode is the “Sidekicks Assemble!” episode of Batman: The Brave and the Bold. Seeing how Brave and the Bold is the kind of show that you can watch a lot more casually than some the episode is fun. But for new fans? There’s a little context lost for them because this isn’t exactly the same Titans they just watched in the feature presentation. The second episode, however, really lacks context for a new viewer/fan, mainly because it’s an episode of the classic Teen Titans animated series called “The Prophecy”. This episode takes place during Trigon’s plot, using Slade to raise himself from the depths, and is more than likely going to lose viewers who have no familiarity with the Teen Titans animated series and no real familiarity with this storyline outside of what’s presented in the main feature. In my opinion these were really unnecessary additions to the special features section and they come off as such.

All in all if you are a fan of informative featurettes that are well-paced and visually striking than, for the most part, the special features packaged with Justice League vs. Teen Titans will entertain you, even if they do contain one or two additions too many.

Thanks to WB Animation for this copy to review.