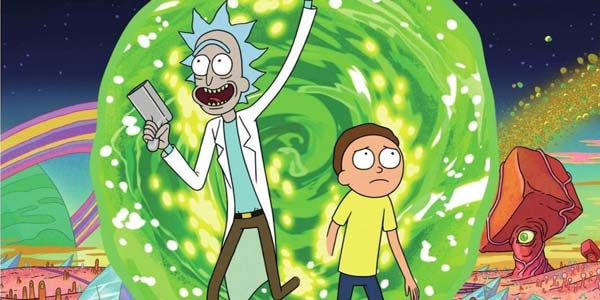 Dan Harmon and Justin Roiland’s sci-fi comedy is totally worth your space and time.

It’s weird that it took me so long to get into Rick and Morty.  I’ve been a big fan of Adult Swim for most of their lifespan as a network, and a die hard supporter of Dan Harmon for even longer.  But there it is– I had never even watched through the entire first season of the surreal sci-fi/ comedy until I checked out the brand new Blu Ray release.  And what I found was a great show, perfectly in-line with Harmon and co-creator Justin Roiland’s style and the best kind of Adult Swim sensibility.

Many of the best Adult Swim series revolve around a send-up of a popular trope, then run with it, and Rick and Morty is no different.  A riff on the scientist-adventurer and his young sidekick dynamic, the show revolves around super-scientist (and alcoholic) Rick Sanchez, and his grandson Morty, a socially (and maybe mentally) challenged 14 year old boy.  The duo balances their days living with Morty’s family, and (of course) a lot of extra-dimensional, science-fueled adventures which more often than not put their lives– if not the fate of all existence– in jeopardy.

The first season of Rick and Morty consists of eleven 22-minute episodes, all of which are featured on the Blu Ray release.  About half the episodes riff on specific movies or other properties– there’s a great Jurassic Park-inspired episode that takes place inside a hobo’s body, and an Inception spoof that features one of the funniest takes of Freddy Krueger I’ve ever seen.  The parody is never the point– like the best premises, these storylines are featured as homages to provide the backbone for what typically remains a very character-driven comedy, keeping the focus on all the traits Harmon loves to focus on– struggling with an inherent lack of normalcy, underdogs being put upon in situations in which they will surely fail, and a focus on the cracks within the seemingly typical family structure.  It’s a bizarre world in which Rick conducts his experiments both scientific and social; it’s subversive and it is, quite frankly, often hilarious and sometimes touching.

I really liked tearing through all eleven episodes on this disc; Rick and Morty presents itself as a very binge-worthy show.  The pacing is often fast and airy, yet a lot tends to happen during each episode’s run time.  There’s a very soft continuity between episodes, with some callbacks and references later in the season, but by and large each installment feels fairly self-contained, making any random episode a good jumping-on point.

In addition to the episodes themselves– presented in a crisp, clear transfer that looks fantastic– the Blu Ray also features deleted scenes for virtually every episodes, as well as animatics that run in tandem with the voice tracks for an animtion geek’s alternate version of each full episode of the season.  There is also a behind the scenes featurette which is appropriately bizarre, featuring Harmon and Roiland fading in and out of serious commentary, which often gives way to complete and utter fucking around, along with their team of oddball writers and artists, many of whom will be familiar to fans of the Harmontown podcast.  And there’s also a pack-in Chick-style comic starring Morty (“The Good Morty”) which is hilarious and features the same subversive sense of humor that makes this show special.

Rounding out the special features are commentary tracks for each episode, which run with both the usual suspects (Harmon, Roiland, and their fellow show staff), as well as special guests such as Matt Groenig, Al Jean, Robert Kirkman and more.  I’ve never been much of a commentary guy, but like fellow Adult Swim creators Jackson Publick and Doc Hammer of Venture Bros, I find Harmon and Roiland damn entertaining, and more than able to keep their commentary simultaneously informative, funny and occasionally uncomfortable enough to  remain engaging.

If you haven’t checked out Rick and Morty, the Season one Blu Ray release is the perfect opportunity.  For fans of Dan Harmon, this show should be another hit.  For fans of old school Adult Swim left-of-center, surrealist humor, Rick and Morty has it in spades.  And if you’re just looking for a fast-paced comedy with some thoughtful pop culture references, interesting oddball characters, a pulpy sci-fi vibe and as much of a mean streak as it has heart, this show will likely be for you.