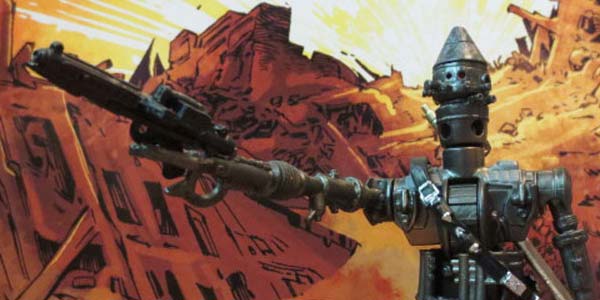 Few phenomena in Star Wars mythology are quite as weird as the bounty hunters we meet in Empire Strikes Back.  Each guy is on screen for, like, ten seconds with no dialogue… and yet their job descriptions and cool designs made them instant celebrities for many of us.  To this day, Bossk or Dengar feel like real, rounded characters, despite the fact that they really are not at all, in terms of Canon.

One of the reasons the cult of personality sprang up around these bounty hunters is the fact that each of them got their own toy in the Kenner heyday.  And since they looked awesome, the hunters ere among the most coveted characters to get the toy treatment.  IG-88 didn’t do jack in the Star Wars movies, but I sent my action figure on countless missions, the kind too dirty for organic life forms, which could only be pulled off by a heartless steel monstrosity like this dude (or Zuckuss, I guess?).

I guess if I had a point to that ramble, it’s that the bounty hunters are cool mostly because they do what Star Wars does at its best– they spark up our imaginations.  And their cool looking toys have always been part of that process.  I don’t play with my toys in a narrative sense anymore (though I really should), but opening up Hasbro’s Black Series IG-88 definitely brought back all those side stories that I invented as a kid, most involving him hunting down a Greedo because for whatever reason he was always hanging around toward the top of my toy drawer.  I know full well most of my adoration for IG-88 comes from my own head, but I don’t really care, because he is great and Hasbro has released what might be the best version ever of the killer droid.

IG-88 was the least humanoid of the hunters we met on the big screen, tall and skeletal and unlike any other droid we met in the movies, and Hasbro’s latest sculpt captures every bit of detail on his mechanized frame.  The robot is cast in a dark gunmetal grey, which leaves him with an authentic metal finish, while a subtle black wash adds a grimy realism to the figure.  Small flashes of color like IG’s red eyes and silver bandolier pop brilliantly against the dark metallic body.  This is, in essence, another largely monochromatic Star Wars figure, but unlike Palpatine, the textural color choices, highly detailed sculpt and paint wash on IG-88 make him seem so much richer and more vibrant, despite the muted, limited pallet.

I was very curious about the articulation on this figure.  The on screen IG-88 was a puppet, and had a certain stiffness because of this.  The Black Series action figure shares this stiffness– IG’s legs and arms are super skinny and stick-like– but the figure packs in as much articulation as possible without compromising the sculpt.

IG-88 features a swivel head, a great chest/ ab crunch offering a huge range of front to back movement, hinges and swivels at the shoulders, hinges and swivels at the hips, double jointed knees, hinged ankles and very cool elbow joints, hidden beneath a soft ribber overlay which hides the articulation completely.  This leaves the figure as the most articulated IG-88 ever, while still paying attention to his awkward, rigid gait.

Every bounty hunter needs a weapon, and IG comes packing several.  In addition to the removable bandolier, this hunter includes a blaster rifle, an Imperial blaster and a knife/ bayonet.  IG’s hands are traditional robot claws, so holding the weapons would be a challenge, had Hasbro’s team not thought ahead.  IG-88 features small pegs sculpted onto his forearms, which line up to small holes sculpted into the hilts of both guns.  This allows you to fit the weapon securely in the figure’s hands, while not ruining the illusion that he’s holding it in his claw-like hands.  The bandolier also includes spaces to store the blaster and knife, as IG-88 did in Empire.

Maybe I’m just an easy mark as IG-88 was always one of my Original Trilogy favorites, but Hasbro really knocked it out of the park with this figure.  He ranks right up there among the best of the Black Series, alongside– coincidentally enough– fellow bounty hunters Boba Fett and Bossk.  Not every figure in the Black Series has been perfect, but when it comes to the bounty hunters, Hasbro’s winning streak continues with IG-88. 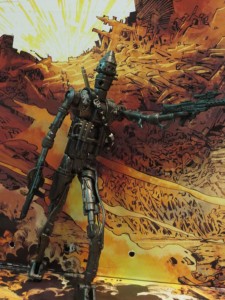 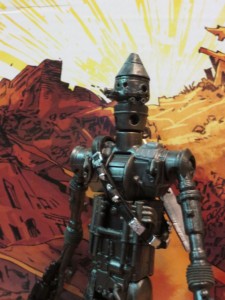 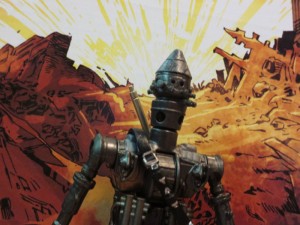 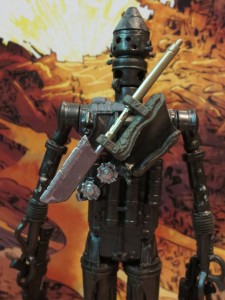 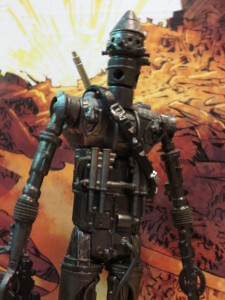 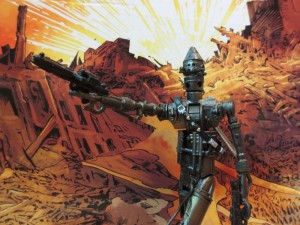 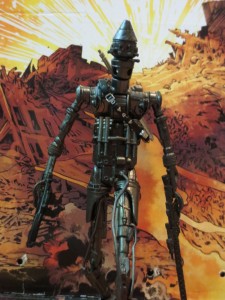 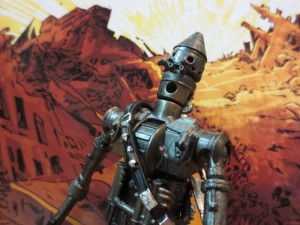 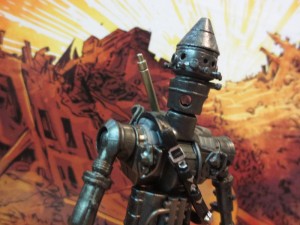 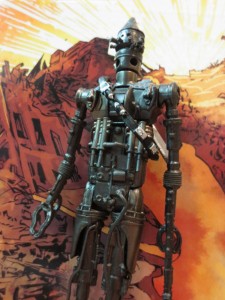 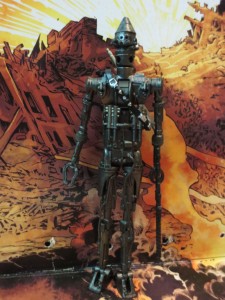 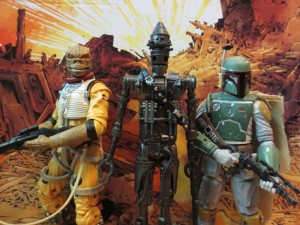 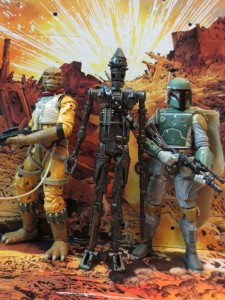