Where Will Booster Gold Land? 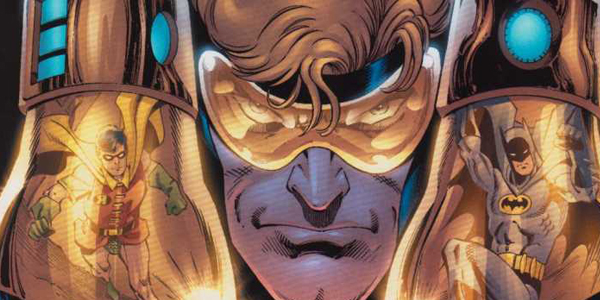 Rumors have been abound where Booster Gold would show up and it looks like one place has been ruled out.

DC and Warner Bros have been long known to not allow heroes to play together. In the JLU cartoon Hal Jordan and the other Lanterns were a no go, while Bruce and Diana were not allowed to visit Smallville. There were talks of Booster Gold in the DC Movie world when there was a nod to him in Man of Steel, and more talks about him getting his own movie during the last year, but nothing firm has ever been reported. Today however Booster’s film star dreams have been dashed, and many fanboys let out a sigh of relief.

In an interview with Vulture online EP of some of the DC CW shows, Greg Berlanti, let everyone know Booster will not be on screen with Bat-fleck and Super-Cavil.

“As of right now we have no connective tissue to those worlds,” Berlanti said when asked if the movie would be part of the DC Extended Universe that already includes Man of Steel, Batman v Superman: Dawn of Justice, and Suicide Squad (with Wonder Woman and Justice League following in 2017). “It’d be a separate thing.” He also said the project emerged from along-dead Booster Gold TV show idea he was working on with longtime producing collaborator Andrew Kreisberg that “never got off the ground.”

For those of you who have been TV but not comic book followers Booster Gold is the father of the CW’s Legends of Tomorrow main hero Rip Hunter. The thought of not allowing Booster to show up at some point on the show would have been a huge blow to fans like me. Booster is all about the fame, stealing a power ring from the future and traveling to the past to try to become a hero like Batman and Superman, but her never seemed to get it right. He was all about the endorsements and spotlight, until he became a time master, and that is when he went from Barney Stinson to Sam Becket.

Where Booster will land is anyone’s guess, but let’s hope he will be part of the DC universe on the CW in the next couple years!