Borderlands 2: Load Up On Guns, Bring Your Friends 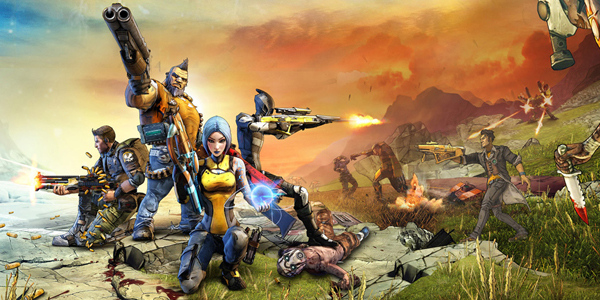 “Helloooo Traveler!” Gearbox’s highly-anticipated, shoot & loot adventure has returned to save you from the drudgery of your menial life; providing an action-packed (and largely hilarious) experience that’s impossibly easy to get lost in.  The developers have taken every aspect of their already stellar 2009 sleeper hit and improved upon them, often subtly and sometimes by retooling entire mechanics.  The result is one of the greatest cooperative shooters ever conceived and a clear frontrunner for game-of-the-year.

I’ve been admittedly too immersed in Borderlands 2 for the last week to even write this review.  It’s like a time sponge that you can get into with the intent of just clearing a couple of quests only to suddenly look up at the clock and realize that eight hours have passed and you haven’t eaten all day.  This is partially due to the enormity of the game world itself.  The universe that Gearbox created here feels much more expansive than that of the previous title, with areas ranging from familiar deserts and wastelands to arctic mountainsides and caverns filled with toxic sludge – each area meticulously designed with unique characteristics and filled with native monsters.  Chances are, many of the quests you are sent on will bring you through several of these areas, each inhabited by locals or containing bounty boards that will in turn also send you on missions.  Before you know it, you’re loaded up with tasks that will send you to dozens of locales, fighting all manners of monstrous abominations and murderous bandits, and snatching every piece of loot you can find. 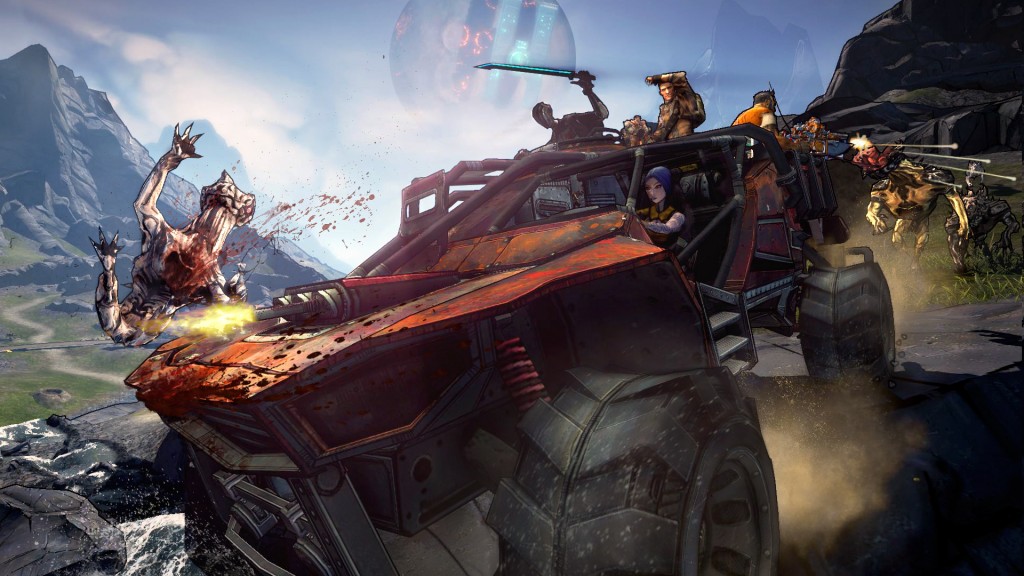 The first thing that will likely stand out as an improvement over the series’ first entry is the narrative. Borderlands 2 sports a surprisingly cohesive and entertaining story that takes place a few years after the events from the previous game.  As one of four vault hunters left to die aboard a booby-trapped train, you awaken to the iconic sound of a bantering Claptrap unit and align yourself with a resistance movement against the tyranny of one Handsome Jack, the title’s charmingly evil main villain.  Although none of the original four characters are playable here, Gearbox did right by their fans and featured them prominently into the game as NPCs that you interact with and fight alongside of.  Thankfully, the new classes and playable characters are a blast to use and their skill trees offer some amazing powers as they level up. 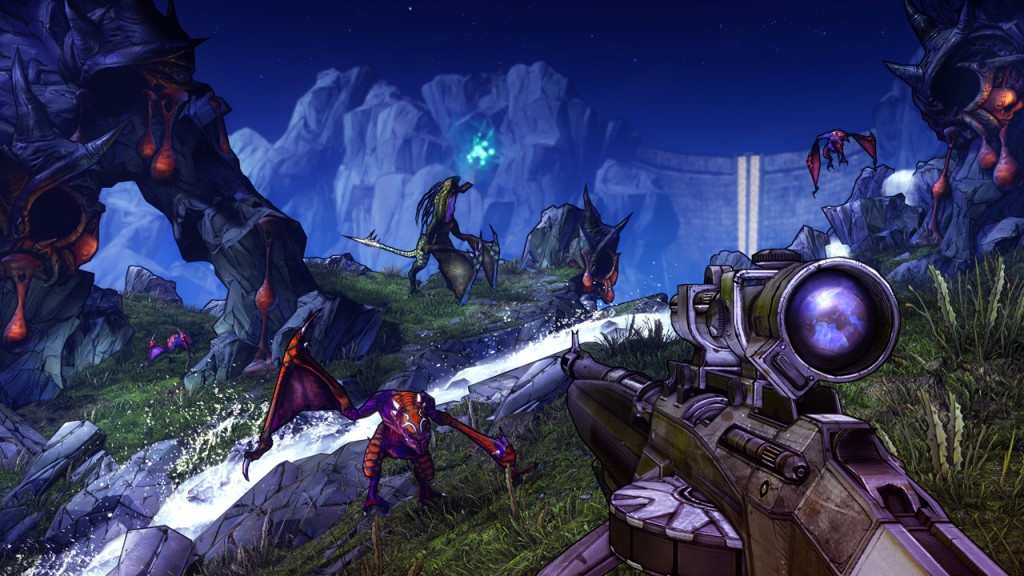 Salvador the Gunzerker is a “tank”-style class who, instead of relying of the expected melee buffs to take out enemies, has the ability to wield any two guns in the game simultaneously to deal tons of damage.  Axton is a dashing Commando class character who relies on an armored turret to rip his foes to shreds.  While this mechanic is very similar to Roland’s from the first game, Axton’s skill tree allows for some incredibly rad turret upgrades that make it feel like a completely new toy.  Maya is a Siren much like Lilith was in the previous title, but her special power is the ability to “phaselock” opponents by encasing them in an energy bubble and leaving them open to be fired on by you and your team.  Finally, the mysterious assassin, Zer0, plays with more stealthy mechanics as he can deceive his enemies with a temporary hologram while he cloaks himself to line up a devastating backstab with his katana.  Each character is capable of holding their own in solo combat, but it’s the multiplayer component that really shines.  When four players get together and combine their powers, with their team skill-boosting relics equipped and working in unison to bolster everyone’s stats, the experience is second to none.  Just pick your friends carefully — not just because sharing the experience with a “team player” makes for more effective combat, but also because you don’t want to get stuck playing with the kind of person that will raid the battlefield for all the freshly dropped loot before anyone has a chance to check it out and leave the party with their discards.  These people are literally the scum of the Earth. 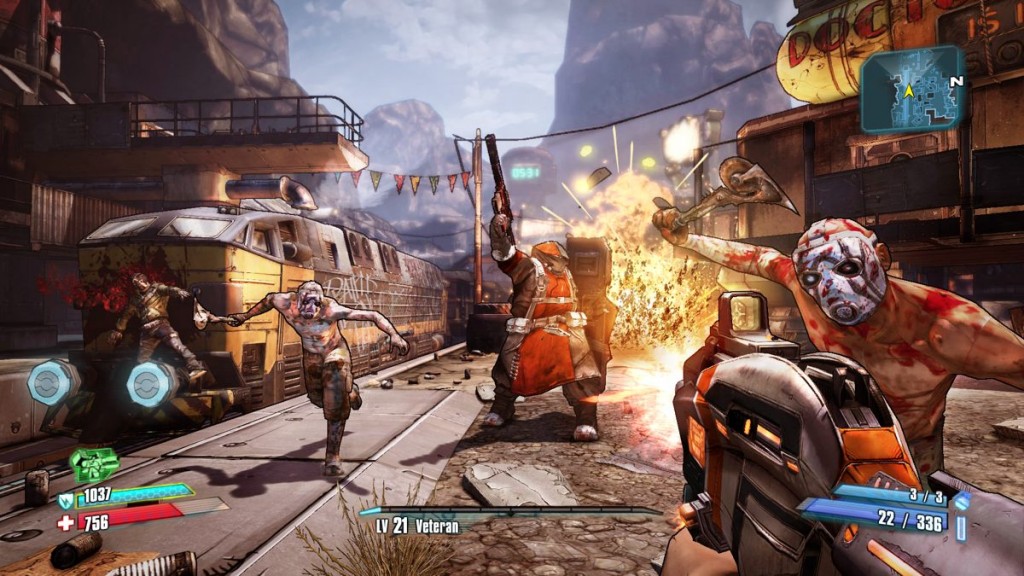 Speaking of the aforementioned powers though, it does take a bit of time for them to really pack a punch. Completing quests and killing enemies (specifically those who are ranked at a higher level than you) awards you with XP, which is shared in multiplayer sessions.  Compiling enough XP with kick you up another level and, starting at level five, grant you one point to add to your skill tree.  While Maya may be able to unlock her Phaselock ability early on, players will need to put in some serious time to reach it’s full potential – incinerating or corroding nearby foes or even causing enemies to turn on each other depending which how you’ve built your character (with a level cap of 50, it’s impossible at this point to fully complete any character’s skill tree).

There are also “Badass Challenges” to complete in addition to the games’ assorted quests.  These are tracked behind the scenes and can include things like killing “x” number of “y” enemies with a “z” type of gun, where x,y, & z are a variety of variables.  While challenges existed in the first game and granted you XP, the system is drastically refined here and award you with incrementally small and randomly chosen buffs to your stats (fire rate, shield regen delay, recoil reduction, etc) which carry over across all the characters you’ve created.  Fulfilling some requirements will even grant you extra costumes and heads for you to outfit your character with. 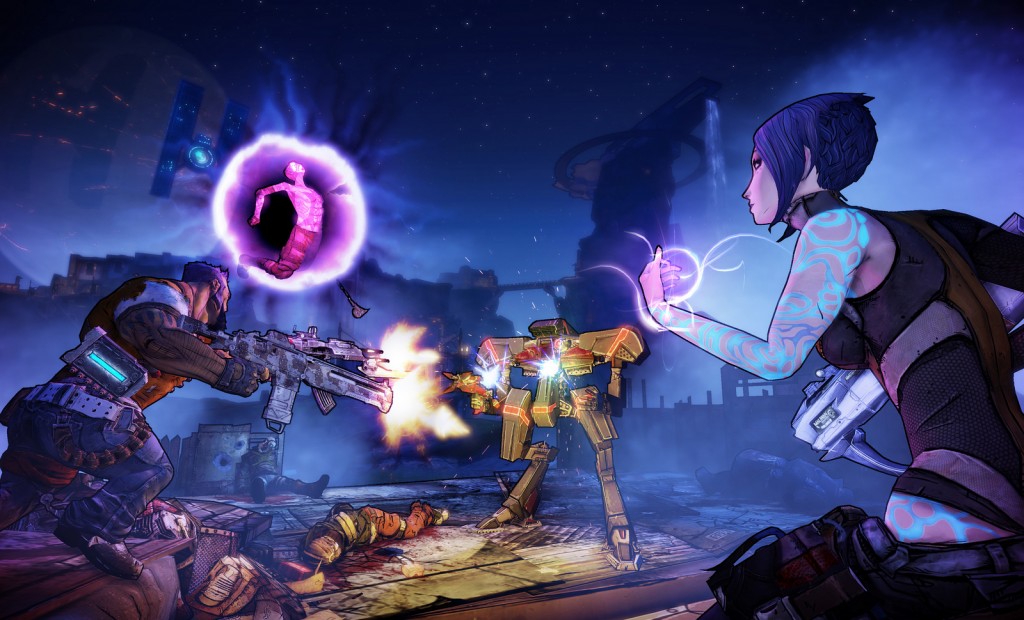 But costumes and skill-boosting relics are only the tip of the iceberg.  The real fun comes in the insane number of guns that the game can generate – millions upon millions of them.  So many that no two players in your games will likely ever have two guns outfitted in the same fashion.  Grenades and shields are given similar treatments, driving home the fact that collecting endless amounts of unique loot is one of Borderlands’ most defining and well-executed features.  Every time your party happens upon an ornate treasure chest, it’s like opening up a Christmas present.  A huge, mechanical, multi-tiered Christmas present loaded with weapons. With so many variations on the guns inside, it’s hard to even anticipate what you will get – sometimes it’s something you don’t care for and others it’s something that you couldn’t have even known existed but is now your go-to instrument of destruction.  Perhaps it’s the instant gratification of a large and particularly difficult enemy encounter ending with said villain exploding into a glorious shower of guns and cash, but it’s just really hard to stop playing once you get into it.  You always just want to find one more chest or kill one for Hyperion Robot to see what you may be awarded with.  Granted, you can only carry what your backpack will hold, which will lead to being a little choosy with what you decide to pick up and will result in frequent trips to interactive vending machines to sell unneeded stock.  Thanks to the intuitive inventory mechanics however, it’s easy to compare all your weapons and determine which setup works best for you. 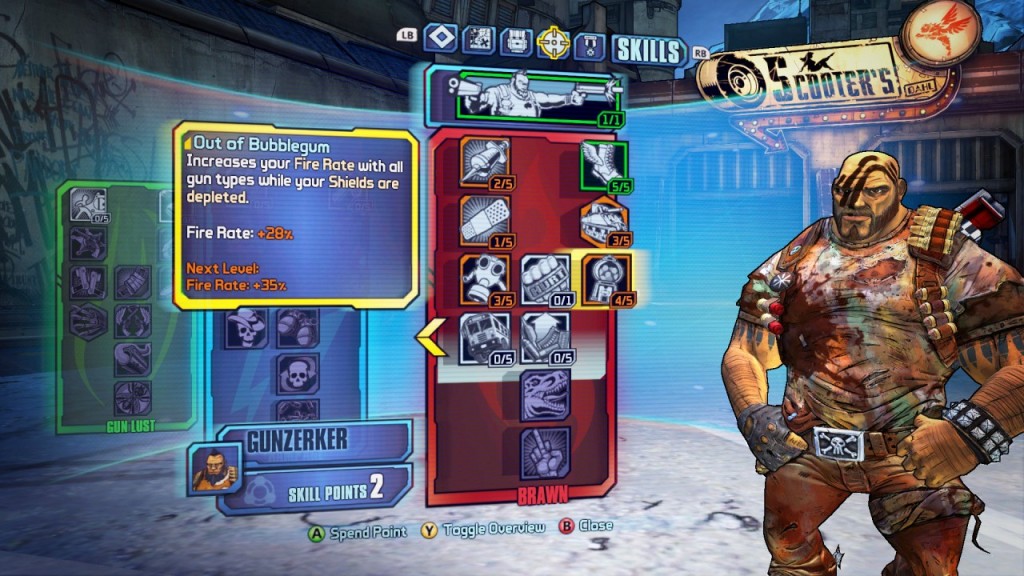 The other reason Borderlands 2 is hard to put down is how damn fun and varied the missions are.  From train robberies to oddball collection quests to frenzied assaults on bandit encampments, the game always keeps it fresh.  In my personal favorite task, I handed out birthday party invitations for Claptrap and then attended his shindig, which no one else showed up to.  The mission was to literally sit there with your robot pal for several minutes and watch him become increasingly depressed and lonely.  It’s things like this that shatter the foundations of what you expect from a first-person shooter and keep Borderlands 2 endlessly enjoyable. 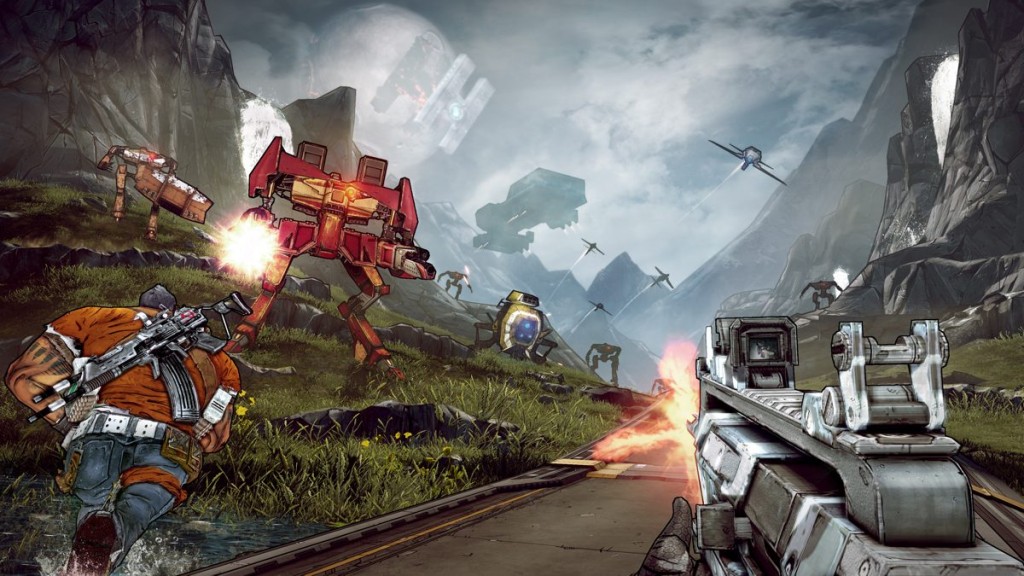 Visually, Pandora (the game’s fictional setting) is beautifully detailed and retains the signature cel-shaded, heavy ink-line style that we all loved in the first entry.  The surroundings are familiar aesthetically, but far more polished and refined than what we’ve seen in the past, and it’s clear (as shown in the extensive artbook that comes packaged with the deluxe editions of the game) that an incredible amount of work was dedicated to getting the look and feel of the world and its inhabitants just right.  By and large, they were hugely successful in nailing not only scores of original and memorable designs, but also in inventing charming and extremely humorous personas for everyone involved, including the story’s “bad-guys”.  There were several pieces of dialogue that had me laughing out loud, thanks in part to the voice actors’ consistently excellent delivery.

Do yourself a favor and pick it up for your Xbox 360, Playstation 3, or PC.  It’s one of the rare occasions when I can say that a game without a doubt justifies its $60 price tag.  There’s a ridiculous amount of content  to keep you busy for months, over multiple playthroughs, with multiple characters (and more downloadable ones to come), and with a bunch of your friends in tow.  Borderlands 2 is a perfect amalgamation of visceral shooters and Diablo-esque lootfests, topped off with a deep RPG leveling system and laced with morbid comedy — one of the most enjoyable multiplayer titles to hit the current generation of consoles thus far.