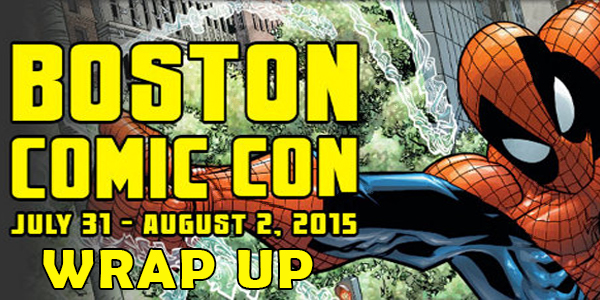 We had a wicked good time in Beantown this past weekend at the 2015 Boston Comic Con.

I spent the past weekend with some of the best nerds in New England as we walked shoulder to shoulder through the long lines of vendors and comic artists at this year’s Boston Comic Convention. BCC 2015 had a lot to offer fans this year, including celebrities like Hayley Atwell, Billie Piper, Elvira, and of course the man himself, Stan Lee. If overpaying for a photograph wasn’t your bag, there were plenty of other opportunities to lose the overburdening feeling that money can have. I managed to leave with a good stack of indie trades and issues from a plethora of up and coming creators, as well as some new sketches to add to my sketchbook. Fans seemed pleased with the smattering of stores, creators and everything in between. Notably, the biggest thing people talked about this years con was the lack of waiting leading up to opening. What had took a couple hours to get through the entrance line a few years ago was fairly steady moving and filled with pleasant people ready to walk the floor.

For the fans that weren’t attracted to the con by the comics themselves, there were a multitude of cosplay creations, allowing any fan to get a photo with their favorite hero. Some of the more notable cosplay included a Captain America holding a log that he could rip apart and put back together again, the many bare bottoms of Poison Ivy, a Darth Vader/Mortal Kombat Scorpion combo, and the youtube sensation real Peter Griffin guy. There was a huge contest on sunday, but seeing how cosplay isn’t my favorite part of the con, I couldn’t tell you who won.

The reason I go to these conventions are to connect with the creators themselves. Being able to look them in the eye and tell them how much you appreciate their stories and their hard work. For me, the two creators I was most anxious to see was Joshua Williamson and Mike Henderson. These are the two guys behind the Image Comics book Nailbiter, which is about a town filled with serial killers. Given the premise, you can imagine my surprise to learn how nice hearted and genuinely kind people Joshua and Mike are. After their Nailbiter panel, where they teased a little about what’s to come in the story, they took the time to talk with me after the panel for a solid twenty minutes. Not only were they interested in what I was working on, they filled my brain with thoughts and inspiration on how to continue. As a developing writer, I look to the advice of guys like them, but I didn’t expect them to be so forthcoming with the information. Truth be told, ever since hearing Brian Michael Bendis’ story about connecting with Walt Simonson, I’ve been eager to experience one of these con moments for myself. Joshua and Mike gave me one. So did John Layman, right after I dissed him, right to his face. Let me explain. I have been following Rob Guilroy on instagram for a little while, but until this weekend, I had never seen his picture. When I saw his name on the table, I asked the gentleman sitting behind it if he was Rob. The gentleman pointed at the younger guy to his left saying that was Rob, and that he was John. So, I immediately moved over and started talking to Rob, but that’s when it clicked. That wasn’t just some guy sitting there named John, that was John Layman. Multi Eisner award winning, writer of one of the most interesting comics, Chew, John Layman. After apologizing profusely and having John smile and shake it off, he too sat there and answered question after question, giving me insight into the industry that isn’t found in any textbook. Why? Who the hell knows? Because he’s John Layman, and he just wanted to be a nice guy I guess. And for that I’m thankful.

So if you didn’t make it to the dirty water this past weekend, you sure missed out. Our Boston Con may not be the biggest in the world, nor offer much in terms of announcements or A-List celebrities, but it’s our own personal slice of nerd heaven. Plus I gotta tell you, you can see a good Tony Stark costume anywhere, but only in Boston can you see Tony Stahhk kid!