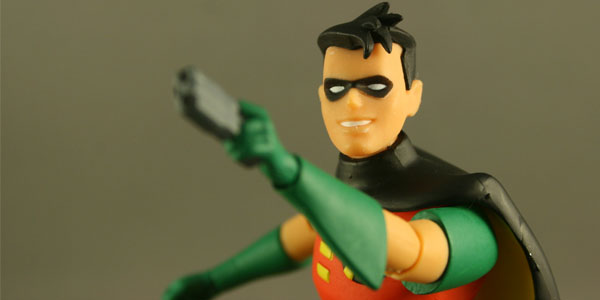 DC Collectibles’ Batman Animated Series Robin action figure is the one I have waited years for.

Sure, I purchased him back in the early 90’s with the rest of the BTAS fans, but those who own him know all too well he was a redecoed Batman Returns Robin with a new head. It broke my heart in two, watching my favorite superhero in my favorite cartoon being treated like an afterthought. So 22 years later, I have the Robin figure I have always wanted. Was it worth the wait? It’s yes and no, and the devil is in the details.

Dick’s costume is pulled straight from the Animated Series model sheet this time around. It has the 90’s Tim Drake look, but without the embellishments and harsh angles found on the comic costume. The toy is appropriately shorter than the rest of his assortment, and Robin proudly smiles, barely containing his crime-fighting excitement.  He includes a menagerie of hands to give him whatever the situation calls for. My favorite touch is the optional capes. Robin’s head is easy to remove, and you can choose either an action oriented cape (which frees up shoulder movement), or one with the cape draping over his right shoulder like the aforementioned model sheet. The capes are made of a very soft plastic, so both really are quite functional. Like the other new releases, his joints move very well, and there is little fear of breaking them, unlike the previous assortment. There is a lot to like with the Boy Wonder.

Again, the toy is fantastic when standing on his included model sheet toy stand, but being an ardent fan that I am, I really want to see what this toy is capable of using its highly-trumpeted articulation and accessories. The arms, once again a black eye of most DC Collectibles figures, can’t do full side lateral movement with the shoulders (though curiously, Joker and Man-Bat can). As an acrobat and trapeze artist, that’s particularly disconcerting. The hip articulation is also kind of awkward for me because it highlights that the sculpted belt is simply too high on the torso, above the waist. If it was below the waist articulation or if the belt was adjustable below the waist twist like Batman’s, it would have been worlds better. The belt sits above the navel. It has been said that it follows the model sheet, but I feel the sculptor should have digested a bit more how the character moves and breathes when animated. If you look at the figure’s back, you even see the small of his back rounding below the belt line, which only underscores the improper placement even further. Standing him next to the Joker is visually off-putting at the pelvis. Joker’s is too long, while Robin’s is truncated by comparison.  These two human characters appear to have very dissimilar anatomy, and I can’t blame the character design for this one. 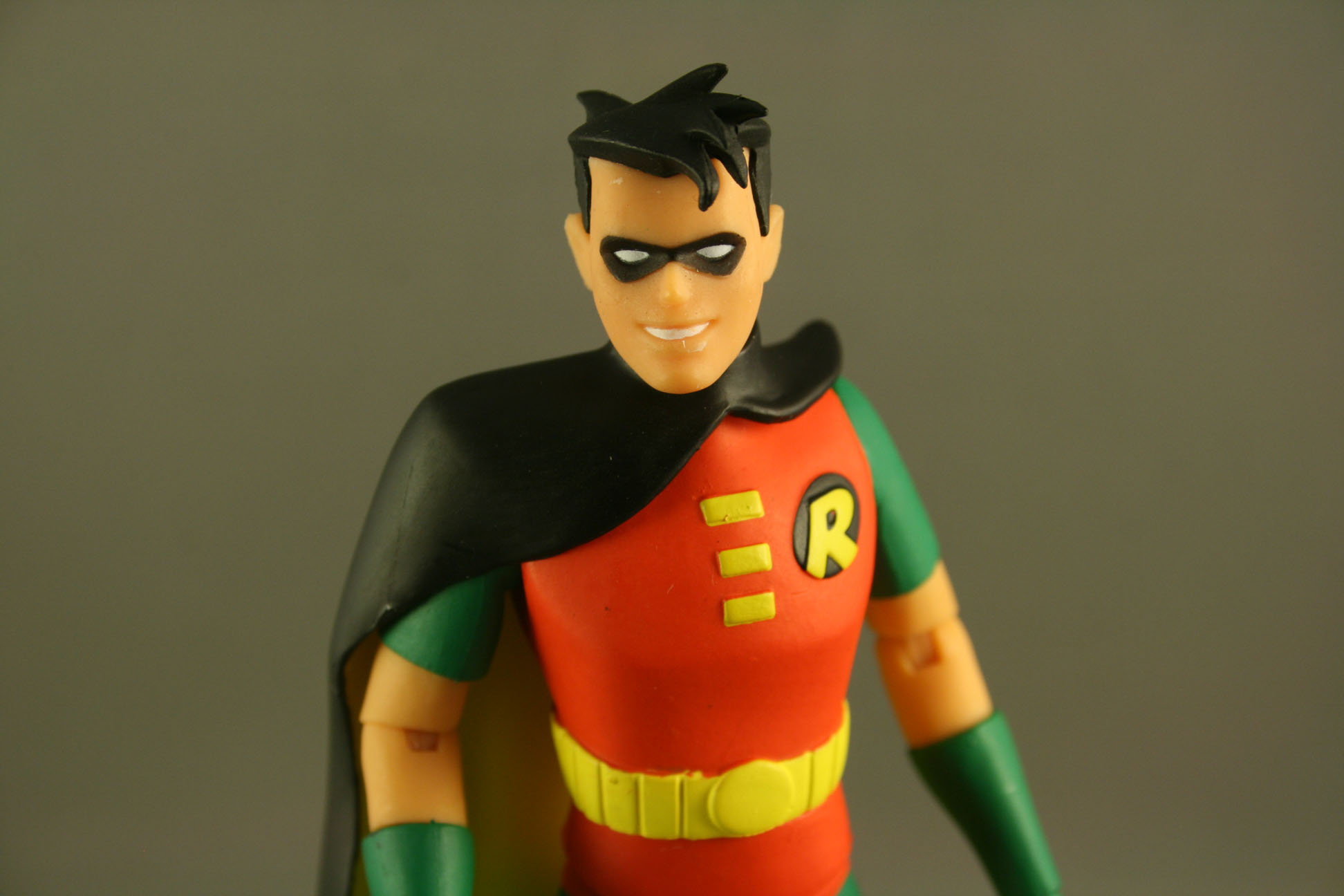 One thing that will bother probably no one but me, but it’s his hair. He has this one point sticking up and pointing to the back, going in the opposite direction of the rest of his spiky hairdo. This, to me, is an artifact of the Kenner figure, tragically brought over to the DC Collectibles figure by the sculptor. I understand that Robin wasn’t consistently drawn, and one finds the direction on his spiky hair changed constantly when he turned his head. From the front, I get they chose a side, which defaulted as parting to his left. However, the one time they don’t follow the model sheet is when it comes to his hair. It actually never spikes back, and both the model sheet and the show illustrate this. Robin’s hair only spikes up and forward, regardless of angle. When Robin is looking straight on, one spike is drawn going left when the rest goes right, but the spike should be pointing towards the front of the head, not back. I thought they would have rectified the “Alfalfa” look Kenner gave Robin, but there it remains. Perhaps the exposure of the last Robin figure spanning 2 decades made this an accepted aesthetic choice. I will have to watch more episodes to see if I am mistaken.

My other moment of disappointment came from the weapons packed in with Robin. I do not see any batarangs or throwing stars he’s used with Batman, so that was a bit of a head-scratcher. This was to stay episode-specific I assume. Robin does have his Bat-grapple, both loose and molded in one of his hands. Trust me when I state I have waited YEARS for these show-accurate accessories to make it into this line, and I was over the moon to see it in the package. However, I may not have the references or resources available that the sculptor perhaps used (provided DC supplied them), but that Bat-grapple seems way too small. I know Robin is shorter in stature, but I never envisioned him having “kid-sized” weapons. I always felt he and Batman use the same gear, and has been animated as such on more than one occasion. It’s not something that should be a detractor, but it does throw me off, admittedly. Lastly, he includes his bola. I find it, too, to be a missed opportunity. It sooner resembles the Thundercat Tygra’s bola whip then a bola with rope. Simply put, the weapon is a plastic cord with a tri-ball end that doesn’t sit or work as a rope or a bola. I assumed it would incorporate black string to tie up a rogue’s feet, or if plastic, it’s molded to display him swinging it overhead before hurling it at his enemies. Either would have been suitable, but this bola achieves neither. I am honestly not sure how he is supposed to hold or pose with it properly, and this really renders it useless for me.

My constructive criticism is because I care about the product, and I love the guys working on the line. I hope that is clear. I don’t hate the Robin action figure. I love it quite a bit. I have two sitting on my nightstand, with one waving high to any visitor to my bedroom. He’s bright, colorful, and smiles back at me. He moves great and I am not afraid to tinker with him. Unfortunately, I have so many action figures, I find myself saying that I only want these toys if they are definitive and I will never see a better-produced collection. I know DC Collectibles are committed this for the long haul, so I will join them. I can only hope they see critiques from myself and others as a fantastic opportunity to make future assortments include the best action figures we’ll ever see. The quality for the last wave to the current wave is proof of their willingness to be better. It can only get better from here. For now, Robin will contently stand on my dresser drawer, waiting for a few Batarangs to be placed in his empty hand. 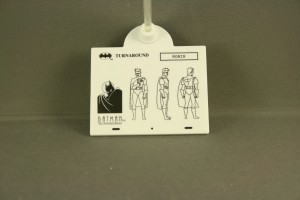 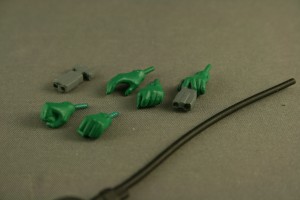 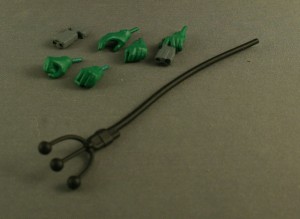 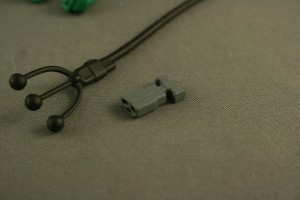 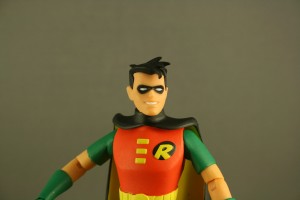 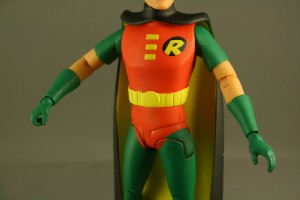 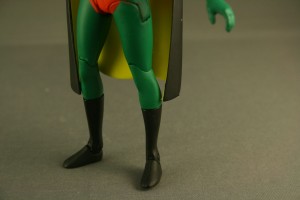 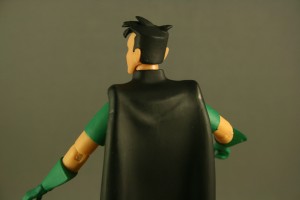 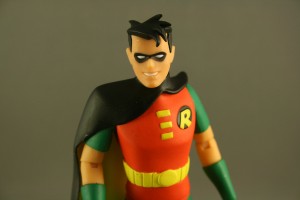 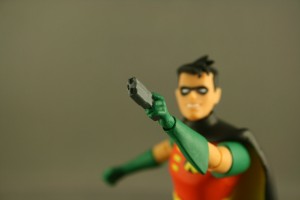 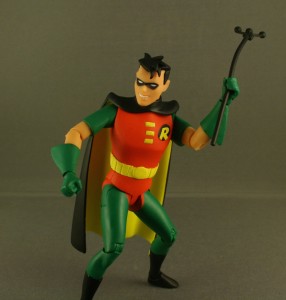 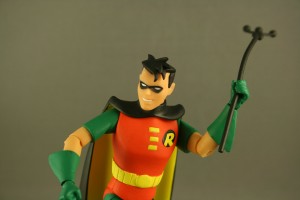 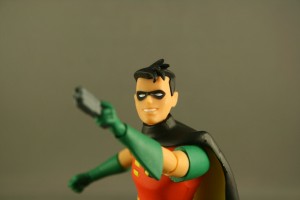