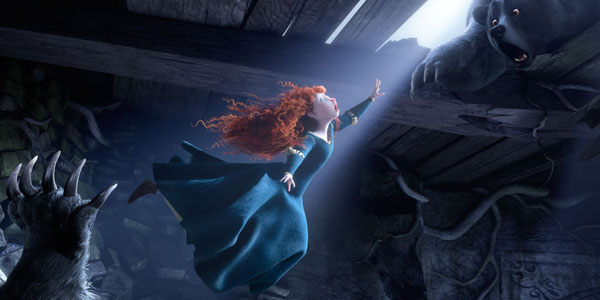 As hard as I try not to, I just can’t stop committing the cardinal sin of comparing every new Pixar film to the ones that came before.  If you can somehow manage to avoid doing that, you’ll really enjoy Brave; it’s a technical masterpiece, the voice acting is top notch, and it has some of the strongest humor of any Pixar film to date.  It feels more Disney than Disney-Pixar, but Brave still has plenty for kids of all ages to enjoy.

Right from the surprising opening sequence, it’s clear that Pixar set out to craft their own version of the Disney princess tale.  The main character Merida, voiced by the (actually Scottish!) actress Kelly Macdonald, is a headstrong young woman who doesn’t want to go along with the arranged marriage that her mother has forced upon her.  She’s only happy when she’s riding her horse through the woods and using her incredible archery skills to shoot things.  Early in the film she makes a rash decision involving a witch, her mother and a giant bear, and a well balanced mix of comedy, drama and action ensues for a very quick 100 minutes.

The storytellers at Pixar have proven time and again that they can create characters who appeal to young kids while building sophisticated, nuanced narratives around them that older moviegoers can appreciate.  Brave doesn’t accomplish this in the same way as WALL-E or Up (which dealt with heavy themes like taking responsibility for our planet and overcoming the loss of a loved one, respectively), but some hints of deeper meaning are hidden underneath the otherwise by-the-numbers plot.  The theme of choosing one’s own destiny is the most prominent, as Merida breaks from tradition and relentlessly forges her own path.  Mother-daughter relationships are also put under the microscope and, having grown up with a sister who had very similar arguments on an almost daily basis, it was easy to relate.  A lot of families don’t pay enough attention to simply listening, which ends up being the root of most of Merida’s problems.

Although moments of false suspense and predictability are plentiful, the story does take a few unexpected turns that I won’t spoil here.  Surprisingly, there is no Prince Charming in Pixar’s vision of the classic princess tale.  There are plenty of male characters in Brave, most of them for comic relief, but the story is mostly about two strong-willed women who struggle to see each other’s points of view until they have no other choice but to accept them.

The animation is predictably astounding.  Merida’s shock of red hair is reason enough to marvel at Pixar’s technical prowess, not to mention the characters’ facial expressions and body language.  Whether it’s Scotland, outer space or a little kid’s bedroom, Pixar can somehow make their computer generated locations look better than their real-world counterparts.  I can’t imagine the next film (a prequel to Monsters, Inc.) looking any better, but I have no doubts that it will.  The soundtrack, a mix of classic Celtic tunes and more intense orchestral pieces, works really well.  I did wish that there were less vocals throughout and more instrumental pieces, as such a distinct music style can easily stand on its own.

If you’ve seen any trailers for Brave or read any promotional material you’ve probably already figured out most of the film.  But if we were to stop watching Pixar films because they’re too predictable, too silly, too kid-oriented or not as good as Toy Story we would have stopped watching them after…well, Toy Story.  It’s obvious that just as much care and effort went into Brave as any Pixar film, and even though its plot isn’t as memorable or thought-provoking as some of the studio’s very best works, it’s still very much worth seeing.  Merida’s mother might have said, during one of her daughter’s more obnoxious moments, “It’s not what you say but how you say it.”  The story of Brave has been told before, but they way that Pixar tells it makes that familiar ground worth retreading.