Create a little trouble with the PREVIEWS exclusive glow-in-the-dark Ghost Lo Pan ReAction figure by Funko and Super7. Fans of the film Big Trouble in Little China can get their hands on the villain Lo Pan and watch him cast some magic as he glows in the dark! The figure is available to pre-order from the August PREVIEWS catalog and will be available to purchase from comic book specialty shops in mid-September. 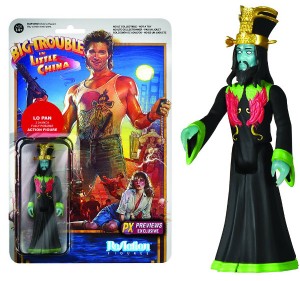 Wearing his black robe and headdress, Lo Pan is artfully rendered in this 3 ¾ inch figure, giving off a magical blue glimmer from his eyes, face, and hands—the figure even has Lo Pan’s trademark elongated finger nails! Fans of John Carpenter’s hilarious fantasy action film can also collect the other characters in the Big Trouble line, including Jack Burton, Gracie Law and Lightning.

This unique Lo Pan figure can be purchased for $10.99 using item code AUG152463 at your local comic book shop. Find a local comic shop at www.comicshoplocator.com.