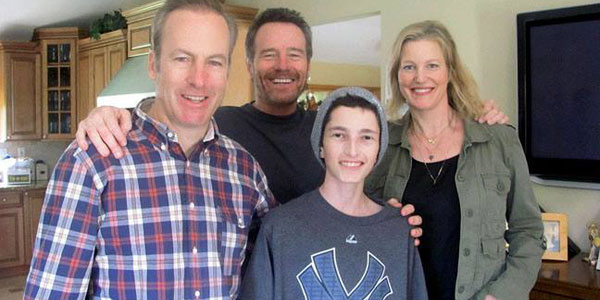 The moving story of a true fan, and the Breaking Bad creators who helped him out.

This week’s premiere episode of Breaking Bad closed with a note paying tribute to Kevin Cordasco, which left many fans wondering who they were referring to.  The Hollywood Reporter uncovered the story— Kevin was a 16-year-old Breaking Bad fan from California, who was battling an aggressive form of childhood cancer.  One of his last wishes was to meet Vince Gilligan, and not only did he get to meet the Breaking Bad showrunner, but Bryan Cranston and many more stars of the show paid him an amazing visit.

That the creators of a show known for the heinous acts of its characters would be so caring and kind toward one of their fans is incredible, and Kevin offered a unique perspective on the show, with his own personal interpretation of the outwardly villainous Walter White.  “There was something about the Walter White character… the way he took control of his illness, and his life, that really resonated with Kevin,” the boy’s father told THR.

Gilligan wanted to bring Kevin to the set for the filming of the final eight episodes, but by that point he was too ill to travel.  When that didn’t work, the show’s creator offered to share the ending of the show with Kevin, so he would know how it all turned out.

Kevin declined the offer.  He was that committed to watching the show’s ending unfold with the rest of us.  He lost his battle to cancer last Spring, before these final episodes began airing.

The tribute at the end of last week’s show may have seemed like a starting point for the mystery of who Kevin Cordasco was, but what it ended up being was a punctuation mark on the touching story of a courageous young boy and the kindness of the artists he loved to watch on TV.