Breaking Down the New STAR WARS: THE LAST JEDI Trailer 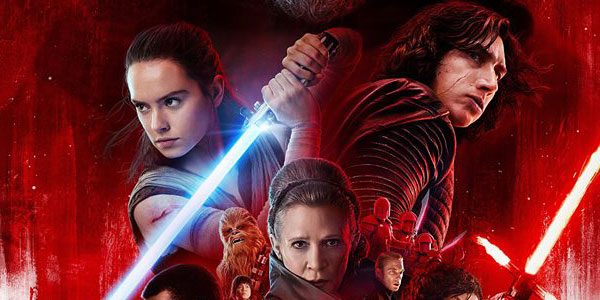 “This is not going to go. The way you think.”

The new trailer for STAR WARS: THE LAST JEDI is here!  And man oh man is there a lot to unpack.  I’ll start with a rundown of some of the highlights for me, personally:

-The look of terror on Luke’s face as he reacts to Rey splitting a goddamn rock in half with the Force.

-Those Gorilla Walkers, which might be my new favorite thing ever.

-That weird stitch/ bandage thing covering Kylo Ren’s battle scar. Is this early in the movie? Or later?

-The even MORE weird, deliberate way Luke talks. It’s nothing like Yoda’s affectation, but it somehow reminded me of that.

-“We are the spark that will light the fire that’ll burn the First Order down.” So says Poe Dameron with a line that reminds me why I adore Poe Dameron more than anybody else in the Star Wars universe. What a badass.

-Rey’s uncomfortable encounter with Supreme Leader Snoke is leaving me genuinely concerned for her well being.

-When was the last time just a HAND IN A BLACK GLOVE gave you such a visceral reaction???

Okay, I’m done geeking out… at least a little. I think the voiceovers are interesting, it’s something that connects this trailer stylistically to The Force Awakens’ teasers.  But now we get a LOT more characters speaking over the captivating images of lush new landscapes, gorgeous overhead shots of First Order legions, and a squawking Porg.  Specifically, we hear from Snoke, Rey, Luke, Kylo, Poe… then back to Luke, Snoke and Rey over the span of nearly three minutes.  In that time, we get what I can only assume to be the core of Rey’s arc, and a surprising amount of attention paid to young Ben Solo, who has thus far not really been in the spotlight in terms of Episode VIII.  Kylo is directly involved in the two most heart-stopping teases within this video, as he possibly blows up his mom, Leia Organa, and possibly coerces Rey to the Dark Side.  They’re both classic teases that could easily be presented out of context to seem more harrowing, but MAN… those scenes worked on me.

We also get a face off between Finn and Captain Phasma that looks damn cool, with the Resistance’s big deal wielding a very familiar weapon, while Phasma’s armor reflects the chaos of combat behind them.  I really, really hope Phasma gets more to do in general in Episode VIII, but if they’re leading to a fight this compelling, I hope even more they flesh out the nasty past between her and the former FN-2187.

It’s been a long wait for trailer #2, but I feel it was absolutely worth it. At this point, we might only get one more before the film itself hits theaters this December. If that ends up being the case, this might be the Star wars film we walk into knowing the least about in franchise history… and that is such an exciting concept I can barely fathom it.

Okay, I’m going to go back to obsessively rewatching this trailer and looking for context clues where there likely are none (fun fact: only Luke, Poe, Snoke, and Rey are shown speaking on camera… what does it mean???). Check out some screen grabs below, watch the trailer above, and get ready for THE LAST JEDI when it hits theaters December 15th.