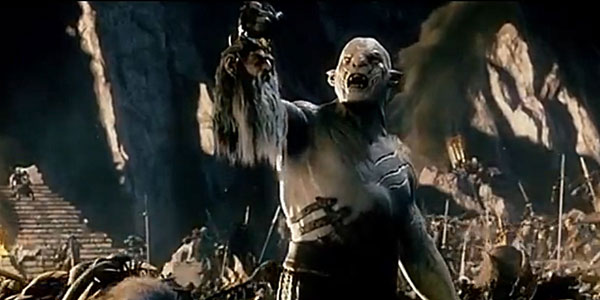 Over the past week, The Bridge Direct has been dropping hints as to the identity of their 2013 Comic Con exclusive, a follow up to the Twilight Bilbo Baggins that set the very impressive Hobbit toy line into motion last July.  Now, Bridge Direct has revealed their exclusive for the year’s show will be none other than Azog the Defiler, and based on their description this figure will be certifiably awesome:

Our 7″ tall Orc Commander Azog comes in a numbered, limited edition of 2,600 pieces. Azog is depicted as he appears in the prologue scene from The Hobbit: An Unexpected Journey. In the battle between the dwarves and an army of orcs to reclaim Moria, Azog holds the severed head of the dwarf King Thror up in victory. The figure comes with interchangeable hands – the right hand that holds Thror’s head can be replaced with a hand capable of holding either his dagger or mace, and the left hand can be switched with the prosthetic spikes that replaced the hand he lost to Thorin’s sword.

A badass orc with a bunch of weapons, swappable hands and the severed head of the Dwarf King?? I’m sold!!!  We won’t see photos of the figure until June 13th, but I imagine he’ll look quite similar to the prototype on display at Toy fair earlier this year.  Some fans have already expressed their frustration that this main character is being released as a SDCC exclusive, but while there’s no official word, I’d bet there will be a basic, non-Dwarf head-holding version in the Desolation of Smaug line when it hits this Fall.

Either way, this figure sounds too cool to pass up, and he’s on my Comic Con must-haves list already.