Bridge Direct reveals new images and details on what Hobbit fans can expect to hit retail this week!

The Hobbit: Desolation of Smaug toy line from The Bridge Direct launches this week (be sure to check your Toys R Us store), and the toymakers have released some new images and details on what fans can expect to find.

For right now, we’re getting three more 6″ figures in the new Desolation of Smaug packaging– two new figures (Azog and Radagast) and Legolas– along with a Mirkwood themed five pack with an all new Thrandruil figure.  They all look pretty outstanding to me!

Bridge Direct notes that more characters will be rolled in to the line as it continues, so if the new items listed above sell well, we will likely see the other 5-packs (which would round out the Company of 13) and the next wave of 3.75″ figures, set to include include Azog, Radagast, Beorn and more.

I hope we get the rest– Bridge Direct showed off some other great looking figures at Toy Fair and San Diego Comic Con, and I’m truly hoping all of those awesome toys see the light of day.

In the meantime, here’s the details from Bridge Direct:

The Hobbit: The Desolation of Smaug continues the adventure of Bilbo Baggins as he journeys with the Wizard Gandalf and 13 Dwarves, led by Thorin Oakenshield, on an epic quest to reclaim the lost Dwarf Kingdom of Erebor, and the terrifying presence that lays in wait deep inside. But first they will have to get through the treacherous Mirkwood Forest, and face Thranduil, King to a race of dangerous and unpredictable Woodland Elves. Escaping the Elf-king, the Company arrive at the shores of Lake-town which borders a waste-land known as the Desolation of Smaug; a land destroyed by a giant fire-breathing Dragon many years ago. As they journey east, under siege from Azog and his Orcs, they must also stay beyond the reach of the mysterious Necromancer that has risen at Dol Guldur.

6” SCALE COLLECTOR FIGURES – SRP $14.99 each
Sure to become coveted pieces of memorabilia, these 6″ scale collector figures feature intricate and authentic detail. Each figure contains up to 12 points of articulation and replicates the facial features, clothing, weapons and accessories of each character as seen in The Hobbit: The Desolation of Smaug. Select from Azog (with Battle Axe accessory), Radagast (with Staff and Hat accessories) and Legolas (with two Swords, a Bow and a quiver full of arrows).

3.75” SCALE BOX SET: MIRKWOOD HERO PACK – SRP $29.99
Join Thrandruil, Legolas, Tauriel, Kili and Fili from The Hobbit: The Desolation of Smaug with this special box set for the avid collector. Each 3.75” scale figure features up to 12 points of articulation and replicates the facial features and clothing of the character in painstaking detail. Also includes 2-3 weapons/accessories for each figure for posing and battling action.

Additional characters will continue to be introduced to this very focused, highly-collectible line as the series progresses and demand warrants. 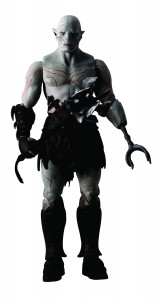 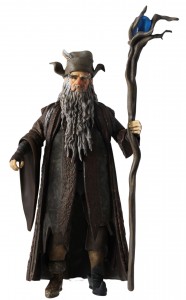