The Bridge Direct To Unleash Smaug the Dragon 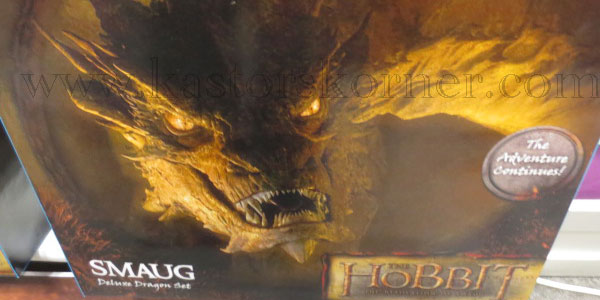 The fantastic Hobbit toymakers reveal their incredible deluxe Smaug figure… which can be preordered today!

We’ve all been quietly, anxiously awaiting news as to what we would see next from The Bridge Direct and their fantastic line of toys based on The Hobbit films, and now we have an exciting answer– Smaug!  The dragon will see release as a deluxe action figure with ten points of articulation, a bendable tail and wing tips, and a 22″ wingspan.

I have been an avid supporter of The Bridge Direct’s work on The Hobbit from the beginning– I actually wish Peter Jackson and his movie team had the same level of skill, devotion and passion for the property as this toy company has shown– but Smaug might be the finest figure we’ve seen yet from them.

It’s not yet know if Smaug will be available at any retailers this Fall, but he is up for preorder at WBShop.com right now, sold as a limited edition of 3,000, and scheduled to ship in December.  There is no way I am missing out on this guy, I can promise you that.

Read more details and check out some images, courtesy of The Bridge Direct:

From the depths of Erebor and the film The Hobbit: The Battle of the Five Armies comes this detailed, limited edition Smaug the dragon large scale action figure, complete with a surprise 1.5″ figure and accessory. Featuring an impressive 22 inch wingspan, Smaug stands tall, measuring 21 inches. No details were overlooked as this center piece of any action figure collection was in development. Smaug boasts ten points of articulation and underwent over 140 painting procedures. The figure is plastic, but Smaug’s tail and wingtips have a wire core, allowing for additional poses. This item has a limited edition production run of 3000 units and each box will be labeled with a gold sticker indicating the number. Please note: no special requests can be made for specific numbers. Measurements are approximate and some assembly is required. Note: the surprise figure and accessory will be revealed at a later date. Age 8+. 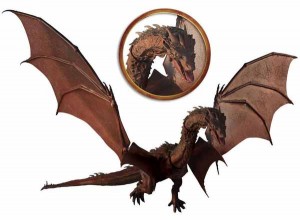 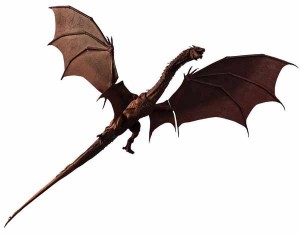 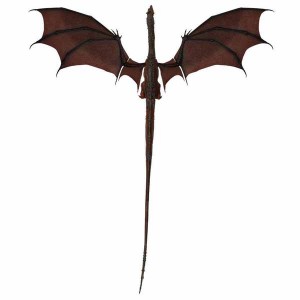