Bubbles Are Carried Off By A Swiftwind 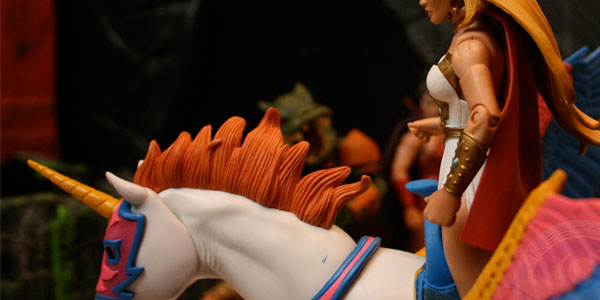 Since He-Man has Battle Cat, it’s only natural for She-Ra to have her trusty steed Swift Wind. But unlike He-Man, she had a bigger obstacle than a lack of stirrups. Needing a new She-Ra to sit on her winged unicorn, we were given the quarterly variant Bubble Power She-Ra. Would she sit? Does Swift Wind give 6” fans a great articulated horse? One really has to look at these two as a matched set, and a set they need to be, because they are truly greater than the sum of their parts. 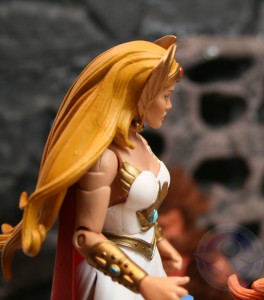 I’ll start with the good parts of these two. Swift Wind was voted to have the white “Royal” Swift Wind deco, and thank goodness for Filmation rights, because the colors we got is easily the most recognizable, and happily breaks up all of the pink and gold. I had heard of issues with the wings breaking the plugs inside, as well as the mismatched legs. Thankfully, the four horses we received were just fine. The wings do pop out easily, but when posed, it’s not really a noticeable issue. If you are only displaying Swifty, it’s also not a problem. As for BP She-Ra, She finally is bestowed a white garment!!! They claimed parts of previous figures were white, but there remained that ugly, gray, dirty white color. Bleach has arrived on Etheria, and just in time. Her dress is not only white, but the plastic is malleable, sufficient to place her on the unicorn’s saddle. Appropriately, she includes her bubble wand and original BP She-Ra toy sword with pink star gem. Her shield was re-decoed as well with matching pink gem. Her tiara was even reinvented to clasp to her hair. This eliminates the huge hole is her forehead when without the tiara. Finally, her bracelets and boots were given the vintage dolls ornate details. For a girl who knew how to accessorize, the original was too faithful to the Filmation series, read: plain. Now she can stand proudly next to my other figures. She is also blessed with a two-part garment, I also love the part interchangeability with version one. I know fans hate the idea of buying two She-Ras, but who didn’t have the original? Those essential parts for our “ultimate” She-Ra were tooled. Those parts are already available, and they don’t affect BP She-Ra’s budget. It was a shrewd decision Mattel made and I applaud it. 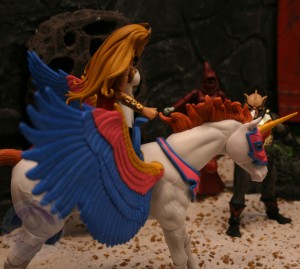 Now as nice as these additions were, there were some ideas and choices that did leave me scratching my head. Starting with Swift Wind, he is a flying unicorn. Budget only went so far in creating his unique tool. His wings are flared out. This directly affects posing him in a display, since they take up a ton of room, room further to be impacted by both the Wind Raider and Granamyr. In a rare misstep, the design choices seem to have no follow-through. The flying mane? The open wings? And all he can do is stand? His legs don’t really move, an understandable thing given the weight needed to be secured on such a large beast with rider. But with that said, he can’t get into any flying poses, nor the pose of his original toy, a crushing disappointment. Worse still, if you are going to sculpt a “flying” unicorn, it needs a flight stand. I guess he looks dynamic, but he stands there looking wind-blown, like a 90’s Toy Biz female figure. He could have also gotten a second saddle with rested wings attached. That would have helped immensely, given the settled mane would have been far tougher to pull off. A stand could have also fixed the issue of having better-articulated legs without the hassle of supporting all that weight. Hopefully, much like his rider, these are action items that can be seen on Spirit AKA Swift Wind v2.0.

Bubble Power She-Ra got a lot fixed from the version one She-Ra, but sadly it was at the expense of her own figure. First comes her tiara. It’s a solid update from the first toy effort, but honestly, the prism stickers are a very 80’s thing. Some may say vintage aesthetic, and it’s a sound argument, but folks like me need to see an update using today’s methods of detail. It looks cheap, quite frankly. Those stickers also needed to match the pink on her gladiatrix armor. They were way too dissimilar. I would have much preferred both the tiara and armor all molded in translucent pink with some metallic wash and etched details (like Bow’s Red shoulder armor), and then the outer edges painted in a lighter gold, over what we had. There appears to be a lack of imagination with the ladies thus far. Even with part-swapping, the gold on the old toy is very dull and dark. Not lustrous at all…very disappointing. Her old cape was also merely repainted gold instead of a newly-molded rounded cape BP She-Ra originally had. Also, I was hoping that along with the newly-sculpted tiara, we would get her hairstyle right as originally intended: she looks like Adora with longer hair down her back. While the hole-less forehead is a welcome change, I do with she didn’t look like she had a rough hairline without it. The tiara needs to stay on her head. Lastly, I get the execution of the dress, but the torso joint is not at her waist, but rather above her navel, anatomically speaking. I am ok with She-ra and some of the PoP gals getting this treatment, since that is how they wore their outfits/dresses, and She-Ra’s belt comes down below the torso cut. But other females like Glimmer, Tallstar, and Jewelstar, may see unnaturally high-waisted tights they shouldn’t have. This may also be due to the new, much-maligned pelvis, which was designed to make the figures shorter originally. Now it make their torsos look even longer! They did the pelvis successfully for Battleground Teela, so I hope this big detail is caught going forward. Every female afflicted with this look thus far gets a pass, but how long will that last?

Your mileage may vary when it comes to these two. As a unit, admittedly, the Ultimate She-Ra sitting atop Swift Wind is truly a sight to behold! She does look powerful and majestic, and they really worked out a lot of what She-Ra 1.0 needed. In doing, however, Bubble Power She-Ra feels unfinished, sadly. Swift Wind also feels unfinished, with all the aesthetics of a flying unicorn, without any method to maintain a flying pose. I am thinking these gaps may need to be filled with a future Swift Wind with Adora v2.0 down the line.