From C-Lister To All Star: MOTUC Snake Face Rules 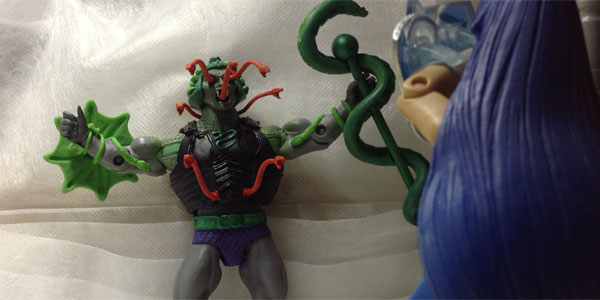 The Snake Men are filling out quite nicely.

What makes 2013 amazing for Masters of the Universe Classics is that, so far, it’s such a departure from the shoddy QC that plagued 2012. For April, we are only getting Snake Face, but having him in my hands, there is so much more to the figure than a reworked action feature. The toy is simply spectacular. And while there are design elements that are up for scrutiny, Snake Face overall came out fantastic. 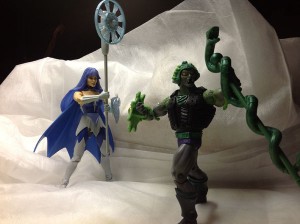 When he debuted for the discriminating masses at Power Con last year, folks were in love with Snake Face. He was a visually interesting addition to the line, and arguably the most dynamic member of the Snake Men. He includes all of his old accessories, and a significant amount of new tooling– he has the expected two heads (finally, he can have is default face intact!) and some unique detailing in the form of his snake-twining forearms, belt/trunks, shoulders, upper arms, and armor. To perform his brilliantly-executed vintage action feature, you swap out the head, and unplug the two straps on his torso armor, and plug the red snakes at his armor base. It’s not dramatically overdone and pays homage to the vintage toy visually more than his 200x counterpart.  Pn top of all this, the $25 figure includes his signature shield and snake staff (which was rumored to being dropped due to budget)!

But with the love came the finger wagging. Again nothing too bad– and all decisions and executions can be explained away. First, yes his vintage torso armor snakes originally flipped down and were green in color. While true, I think the toy is so much nicer this way. First off, all of the petrifying snakes are one color and size, which works stylistically. Secondly, the armor snakes take the impressive illusion of transforming magically from armor strap to snake. There was also talk that the armor blouses out, and it’s too wide. This is true. Unlike other reviewers, I am able to bring his arms down to his sides, which rounds out the armor and makes it better resemble the prototype. Either way, it is still armor, and I understood that armor on these figures will make bringing his arms down difficult. Not perfect, but not awful. Lastly, I am glad they didn’t overdo the action head and make the helmet snakes alive like the Staction figure. It would have been overkill and I prefer them to merely be helmet ornamentation. 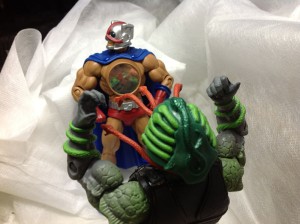 As glad as I am that they stuck with the vintage execution, I feel there could have been even more chances taken. Personally I would have preferred the BuzzOff upper legs to match the upper arms, but I can’t fault them for sticking to how he was on the vintage toy. Also, the shield is very small and not proportionally bigger than the vintage one. I always felt the design of the shield was meant to hypnotize his foe before turning them to stone. Instead of what we were given, I would have made the shield larger and capable of spinning. $25 can only take Mattel so far, and again, it follows the vintage toy very closely. No harm, no foul. Lastly, I would haven preferred a more substantial green wash over the shoulder area, given the ball joint is cast in light green.

I can’t effectively put into words how awesome and worth every penny Snake Face is as a Matty Collector action figure. This is a character that is maybe a C-lister and executed so fantastically. He could have had other stylistic choices, but the changes they went with, I feel, were tackled expertly. I am so thrilled to write another review daydreaming what other cool stuff they could have done, rather than lamenting what the factory botched and Mattel missed. This is giving much-needed luster back to Masters of the Universe Classics. If they keep up this level of quality and execution, Mattel won’t even need A-List characters to sell the 2014 subscription. Hurray, another excellent job Mattel. Keep up the momentum! 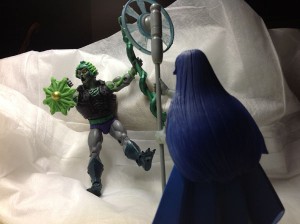 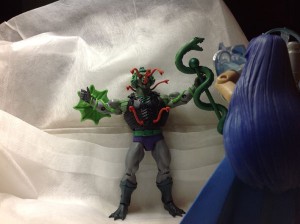 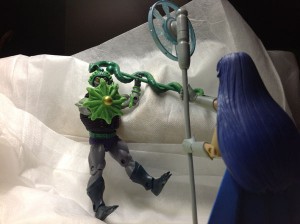 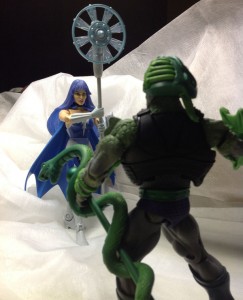