Captain America Getting A New Costume For Winter Soldier? 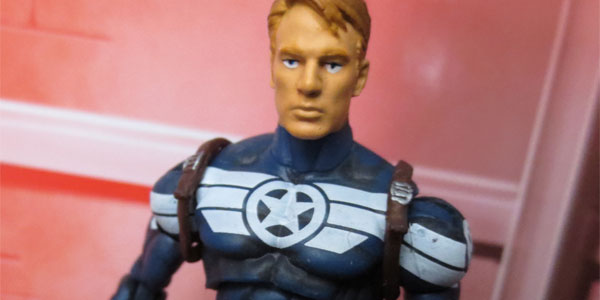 This weekend, Comic Book Movie leaked what appears to be a promotional image of Chris Evans as Captain America popped up online, featuring a new costume that modern comic readers probably recognized right away. The new suit is navy blue with a white star pattern on the chest, and brown combat boots and fingerless gloves… it looks a hell of a lot like Steve Rogers’ Supersoldier costume from Secret Avengers, only with a helmet.

It’s still only a rumor as to whether the new costume will appear (or how often) in the new Cap movie, but based on the fact that Disney has been trying to pull the picture offline, it seems pretty legit.  I’m not really sure how I feel about this new look.  Cap is always a man out of time, never quite “with it,” and I loved that his look in his first movie and The Avengers was slightly sillier and more fantastical than most of his teammates. It felt right for the character, and I liked that.

The new look is much more practical and realistic– the darker tones, simplified design pattern, military vibe and even the new slimmed down helmet all come across as much more believable, and more in line with what we’d expect from a comic book adaptation movie.  Like I said, though… Cap’s previous on-screen costuming actually played to his character, so I am hoping that even if this new outfit isn’t quite as impressive, the reason for it existing will somehow come into play.

Between this and the “Caffeine Free” Mark 42 from Iron-Man 3, it seems like one trend within Marvel’s Phase Two is a move away from our heroes looking like the heroes we know. Since the first X-Men, I’ve learned to not judge a super hero movie by its cover– while I’m a bit disappointed to see Marvel step away from their most iconic looks (which had been translated miraculously well into the real world so far), as long as the stories stay strong, I’ll keep watching no matter what they’re wearing.

Click Here to check out the new Captain America costume, while it’s available at MarvelousNews.com