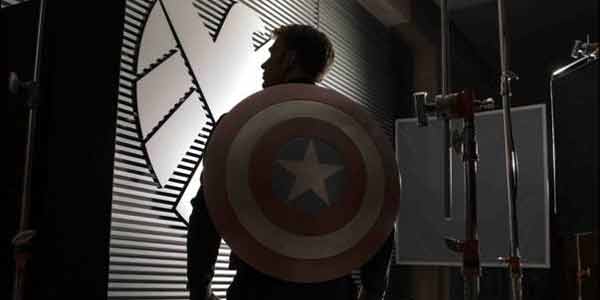 The new Captain America movie started filming this week, and we get a first image… along with some interesting new details about the sequel.

Captain America: The Winter Soldier started filming earlier this week, and Marvel has released the image above to commemorate the occasion.  They also sent out a new press release, which has a few bits of interest regarding the new movie.

“Captain America: The Winter Soldier” will pick-up where “Marvel’s The Avengers” left off, as Steve Rogers struggles to embrace his role in the modern world and teams up with Natasha Romanoff, aka Black Widow, to battle a powerful yet shadowy enemy in present-day Washington, D.C.

More than likely, the “shadowy enemy” is a reference to the Winter Soldier (AKA Cap’s old war buddy Bucky Barnes), although based on the comic series, that could be a reference to General Aleksander Lukin, the villainous CEO of Roxxon who becomes possessed by the disembodied Red Skull.  There’s been no confirmation that Lukin or the Skull will appear in the new movie, but he’s a fairly focal point of the comic and having Red Skull inhabiting a new body would be the perfect work-around for the not-returning Hugo Weaving.

Also of interest– both Natasha Romanov (Black Widow) and Sam Wilson (The Falcon) are referred to by their code names in the release… but new villains Crossbones and Batroc only get their civilian titles.  Batroc’s real name is Georges Batroc, so no big deal there, but I’d be a little disappointed if Crossbones doesn’t get his villain name or skull mask during the movie.  Crossbones has typically looked cooler than he is as a character, so taking that aspect away from his movie version could leave him falling flat.

The biggest thing, though, is the reveal of Robert Redford’s mysterious senior SHIELD leader.  Redford will play Alexander Pierce, a SHIELD agent who featured into the “Nick Fury vs. SHIELD” storyline in the comics.  Pierce was Fury’s sole ally within the spy organization when it was taken over by Deltites (AKA Life Model Decoys, which were jokingly hinted at in The Avengers).  It’s way too early to tell how much of the comic character will be adapted for the film, but considering in the comic he’s a SHIELD accountant and here a senior leader, I’m assuming it will be fairly liberal.

I feel like I’m in the minority, but I really, really liked the first Cap movie, and I think the Winter Soldier saga is a fantastic direction for this sequel.  They’ve built another great cast, Chris Evans won lots of admiration after Avengers, and I have truly high hopes for Steve Rogers’ second big screen outing.

“Captain America: The Winter Soldier” will pick-up where “Marvel’s The Avengers” left off, as Steve Rogers struggles to embrace his role in the modern world and teams up with Natasha Romanoff, aka Black Widow, to battle a powerful yet shadowy enemy in present-day Washington, D.C.

Marvel Studios’ upcoming release schedule includes “Iron Man 3” on May 3, 2013, and “Thor: The Dark World” on November 8, 2013. The studio most recently produced the critically acclaimed “Marvel’s The Avengers,” which set the all-time, domestic 3-day weekend box office record at $207.4 million. The film, which shattered both domestic and international box office records, is Disney’s highest-grossing global and domestic release of all time and marks the studio’s fifth film to gross more than $1 billion worldwide.

In the summer of 2008, Marvel produced the summer blockbuster movies “Iron Man” and “The Incredible Hulk.” “Iron Man,” in which Robert Downey Jr. originally dons the Super Hero’s powerful armor and stars alongside co-stars Terrence Howard, Jeff Bridges, Shaun Toub and Gwyneth Paltrow, was released May 2, 2008, and was an immediate box office success. Garnering the number one position for two weeks in a row, the film brought in over $100 million in its opening weekend. On June 13, 2008, Marvel released “The Incredible Hulk,” marking its second number one opener of that summer.