Captain Kirk Joins The Crew Of The One:12 Collective 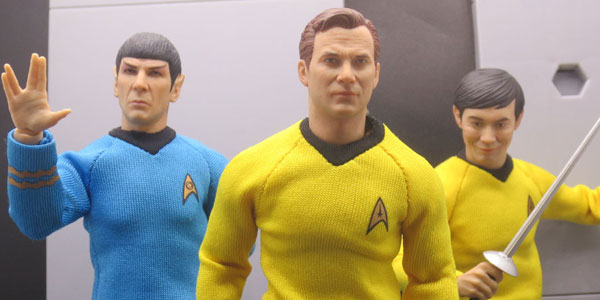 The Captain of the USS Enterprise is the latest excellent release in Mezco Toyz’ Star Trek One:12 Collective line.

We’ve already seen Mr. Spock and Mr. Sulu join the One:12 Collective from Mezco, but the third and final (confirmed) release brings Captain James Tiberius Kirk to the series.  And he was worth the wait.

Kirk features the same great articulation as other One:12 figures, but on a new hyper realistic medium body, which matches William Shatner’s athletic build.  Both of the alternate head sculpts– a roguish smirk and a determined stare– are near perfect portraits of Shatner.  And the paint work is intricate, with a matte finish on Kirk’s skin, the perfect tone of brown for his hair, and high gloss eyes that bring the figure to life.

If you’ve had the privilege to check out Spock or Sulu, then Kirk’s well-crafted Starfleet uniform shouldn’t be a huge surprise.  It’s very well tailored, fitting the body very naturally and allowing for a full range of motion, and the choice of material is perfect, with its smooth finish and ability to stretch which matches the outfits on the classic TV series. 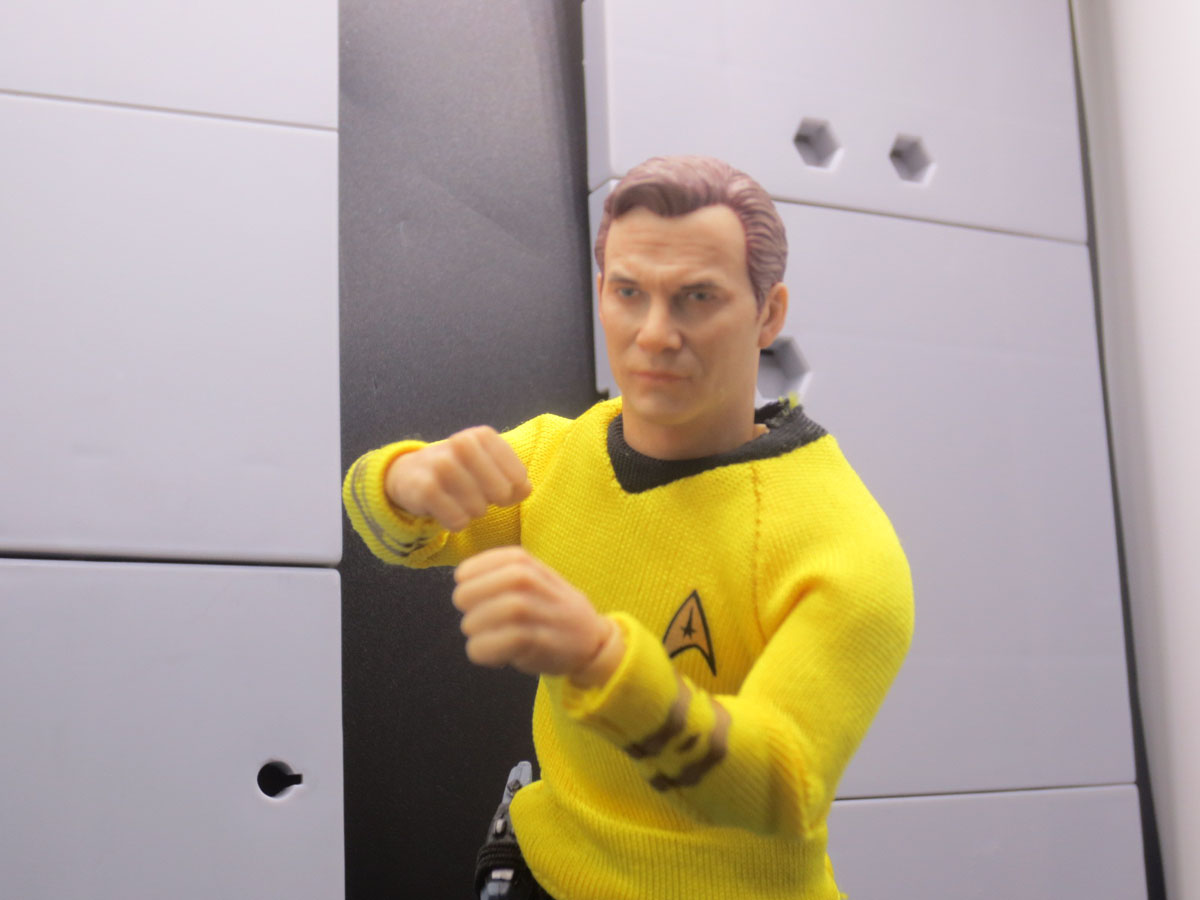 Each One:12 Star Trek figure has included some standard issue and unique accessories, and Kirk is no exception. While our fearless Captain is packed with a utility belt, Tricorder, and Phaser, he also includes a rifle only available with this figure.  And the figure is enhanced further thanks to his alternate hands, which are sculpted to hold his gear, stand neutral, or pack a punch with Kirk’s signature twin fists.

Kirk also includes a circular display base featuring the Command insignia on yellow, as well as a clear plastic armature to help with action poses.  Kirk’s fifth window box continues this same aesthetic, with a gold embossed Command insignia and a window which displays the figure and his multiple accessories quite nicely.

Captain Kirk is available now, along with Spock and Sulu.  If you want to add the Captain to your collection– er, Collective– head over to Mike’s Comics N Stuff to order yours today. 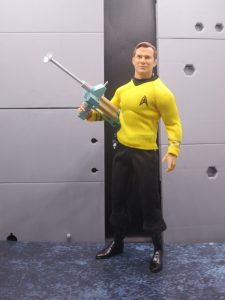 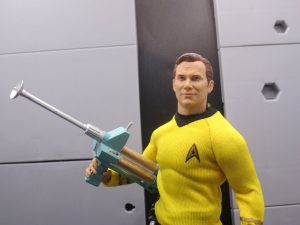 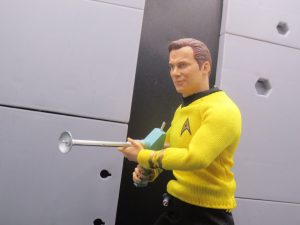 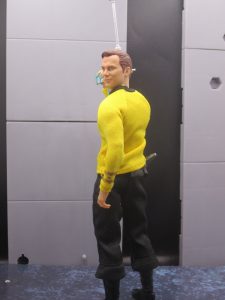 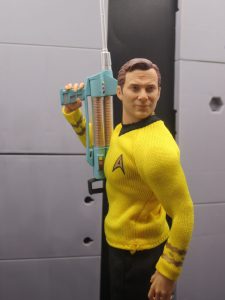 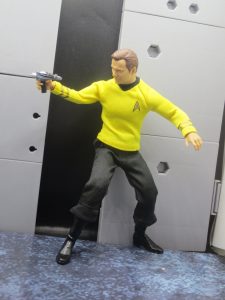 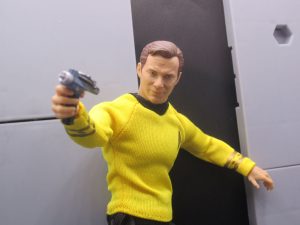 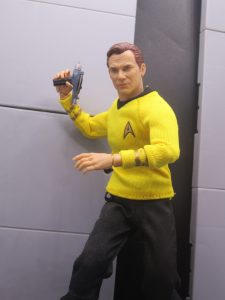 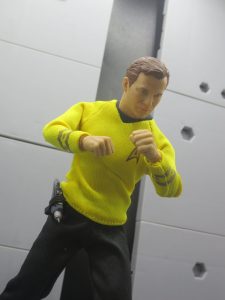 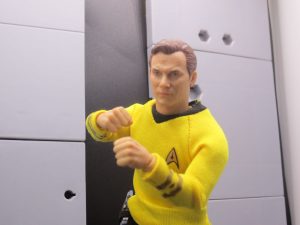 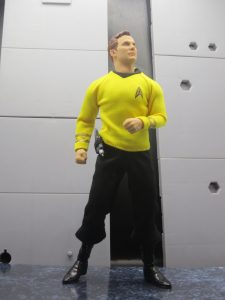 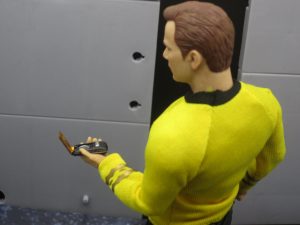 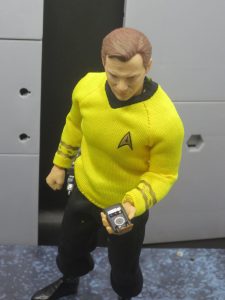 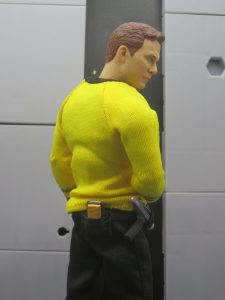 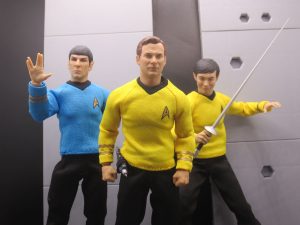 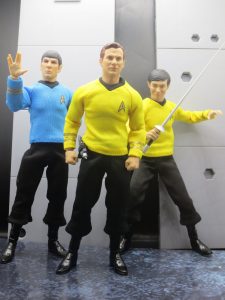 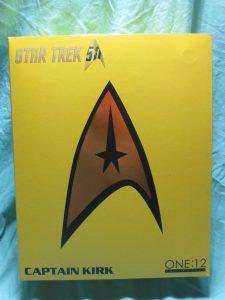 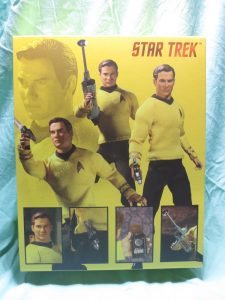