Here Is What Casey Jones Looks Like In Ninja Turtles 2 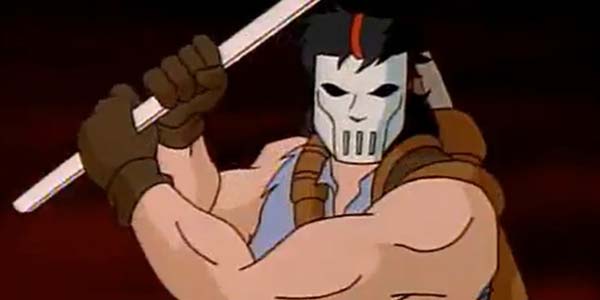 Kind of over the top.  Kind of dumb.  Kind of perfect.

I can’t tell you why, exactly, but I have this feeling that Ninja Turtles 2, the sequel to last summer’s Michael Bay-produced reboot is going to be something special.  Not that it will be good– it’s basically a foregone conclusion that it will be a terrible movie… but while the first film was pretty much joylessly awful, this one is shaping up to be so bonkers that it might transcend its own badness to be a lot of fun to watch.

I mean, we’ve got Tyler goddamn Perry playing Baxter Stockman!  His presence as a normal human Tyler Perry would be good enough… but the higher-than-average possiblity that he will mutate into a human-fly hybrid Tyler Perry in this movie?  That brings things to a whole new level.

And, we’ve got Green Arrow playing everyone’s favorite manic vigilante, Casey Jones!  That’s more to point for this article, I guess, which is supposed to show you what Stephen Amell will look like in the hockey mask.  Or, the extreme angles and vaguely defined shapes that could be considered a hockey mask, at least. I’m curious to see how it will look, paired with the backpack loaded with 500 hockey sticks and baseball bats, which i am confident the movie Casey will carry.

This franchise is literally soaking in over-design– a production value that would probably make Caligula question if it isn’t just a bit “too much”–  so this goofily exaggerated, comically over-sized, and generally impractical mask actually feels like the filmmakers’ attempt at subtlety in comparison.  I love it.

As we saw more and more glimpses of the first Ninja Turtles, I felt disheartened as the weird and yucky looking Turtles and over-the-top Shredder came to light.  Maybe it’s because the movie wasn’t Transformers level bad… or maybe simply because it WAS still really, really bad… but this time I want them to go as big and broad and ungainly and stupid as possible.  Tyler Perry is an amazing step in the right direction.  This silly looking Casey is another victory.  Keep reaching for the stars, Ninja Turtles 2 team, and dare to dream.  I believe in you!