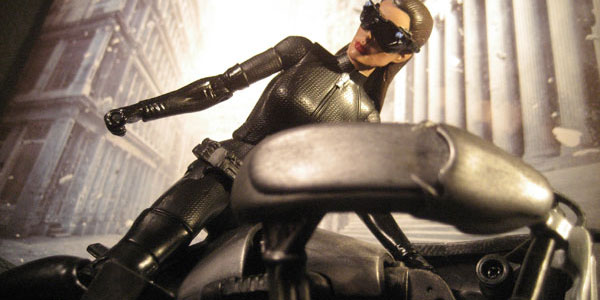 The latest figure to join the Dark Knight Rises Movie Masters collection is Catwoman, and Batman’s enigmatic foil/ ladyfriend is another solid addition to the series. 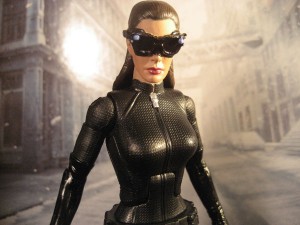 Catwoman is just starting to hit retail, part of the second series of Movie Masters (kind of– I actually love the “rolling change” cases Mattel has been distributing for these figures. With three different case mixes following each other in fast succession, new figures are cycling in steadily and all but Batman are selling through nicely). Selina’s figure is available in two variants– with her goggles down over her eyes or on top of her head, giving her the illusion of “cat ears.” I chose the goggles down look, as that was the only one left when I got to the store.

I’ve had some issues with the design aspect of Dark Knight Rises for a while now. I’m sure the movie will be good enough for me to get over the uninspired costumes on display, but truth be told Mattel’s line is starting to sway me even before the movie hits. Catwoman is no exception, as I was very disappointed in Nolan’s all-black, plain look for the villain.  I get that the director’s big fetish is practicality and realism, so a cat burglar would most likely wear a nondescript black outfit. But the practical concept betrays itself with the inclusion of goofier elements like the knife- blade high heels and the domino mask, so it seems like a mess overall.

I’m still not entirely sold on the look, but Mattel did a great job on Catwoman, with a nice fish scale-style pattern sculpted on her jumpsuit and another well executed mix of matte paint for the jumpsuit and a glossier finish for the patent leather boots and gloves. Selina sports all the standard DCUC/ Movie Masters articulation, and the pliability of her hair gives her a fair range of motion at the neck.

The figure’s likeness to Anne Hathaway is decent, although like Alfred she seems more like a cartoon or caricature of the actress than a realistic sculpt. The goggles covering her eyes offer a more generic look for her, which takes away the cartoony vibe of the eyes. I can’t say for sure, but I think this Catwoman might be too tall… she stands very near Batman’s height (counting her heels), and I’m not sure if this scale is correct to the movie or not. What is much more clear is Catwoman was sculpted with hands ready to hold an accessory– like a whip, perhaps– but the figure comes with nothing but Selina’s contribution to the Batsignal base. 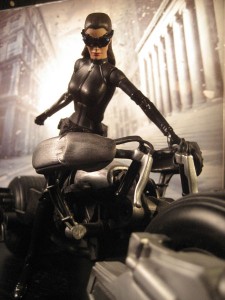 At first I though the goggles up/ goggles down thing was kind of a lame variant. Why not just make the piece movable? But after seeing both versions now, I think the reason is the odd way the goggles get positioned on Selina’s head when they’re up. To get the cat ear effect, the goggles appear to rest lens-down on her head, with the stems from the sides making the ear shape on top of her head. After figuring this out, I’m OK with the variants, as it would be tough to replicate this tricky move in a single piece. Although rather than have collectors shell out for two full figures, they could have easily packed in both swappable heads, like we saw with the great interchangeable hands on the 2-pack Bane.

Mattel’s Dark Knight Movie Masters have been surprisingly excellent toys, and they’re doing their job in the best way possible, building my interest in the new film slowly and surely. There’s only two more figures, and I’d expect they’ll be dropped into the line using the shape rolling format we’ve seen so far– up next will be GCPD Officer Blake, and then the final “mystery figure” who Mattel claims won’t be revealed to the public until after the movie hits, and who is probably Ra’s al Ghul. 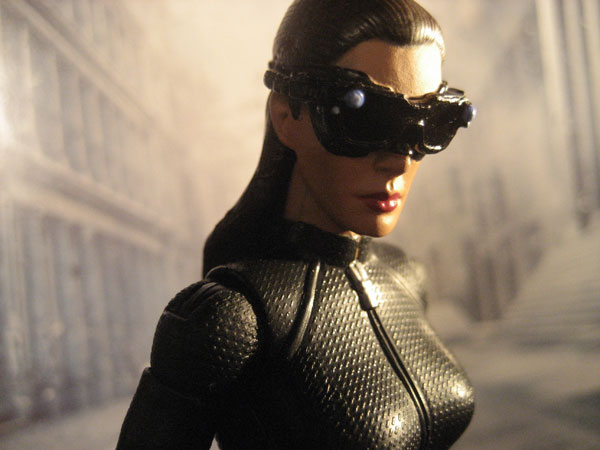 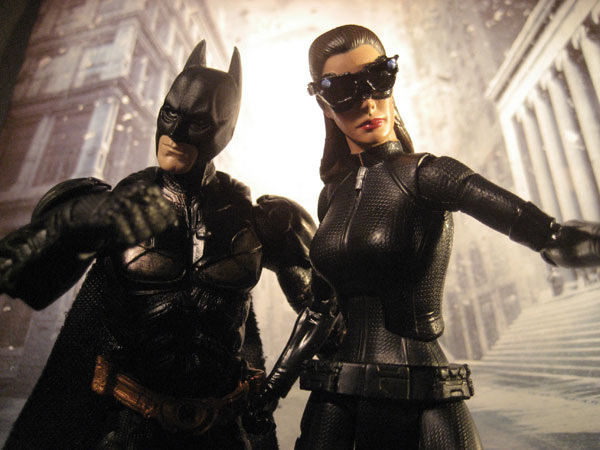 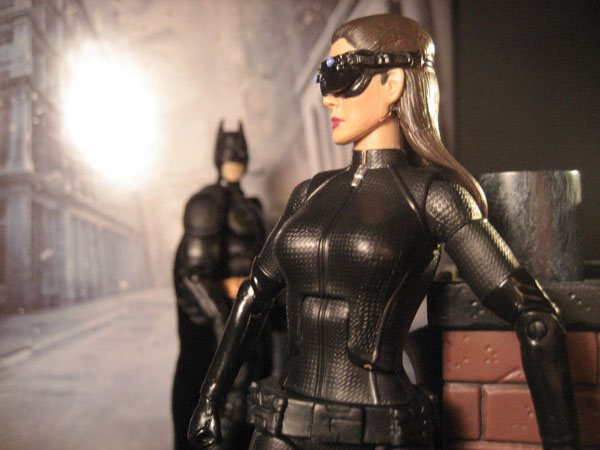 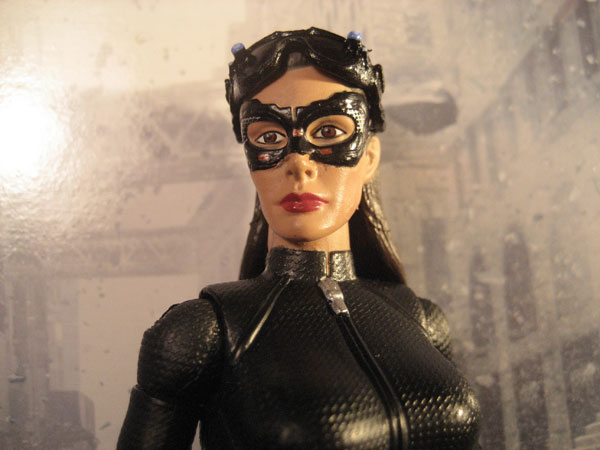 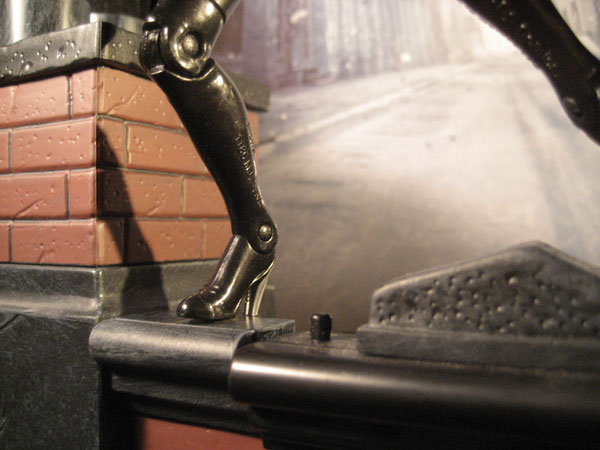 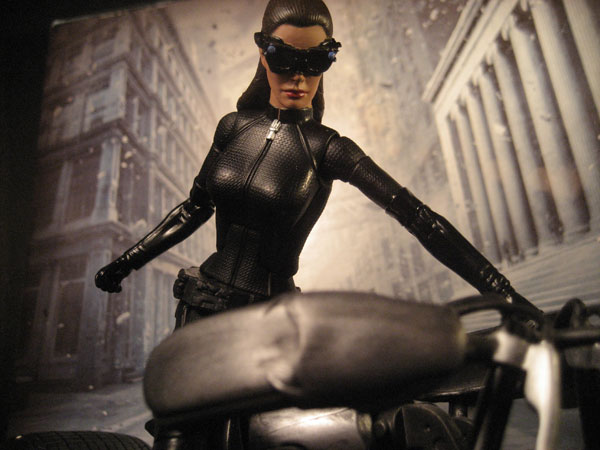 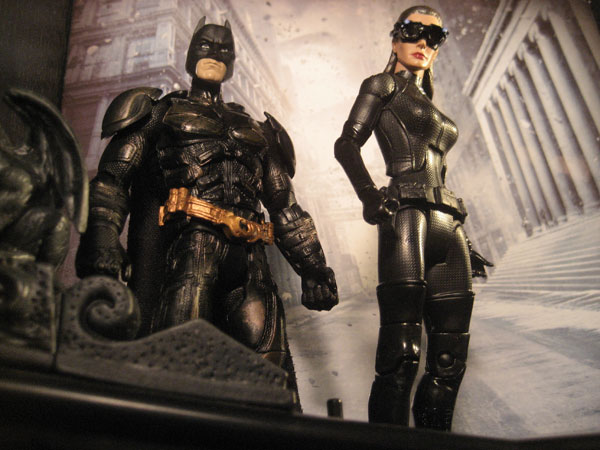