If It's Not A Toy It's Here, Khalil's Korner

Chadwick Boseman: Forever Our King and Our Light 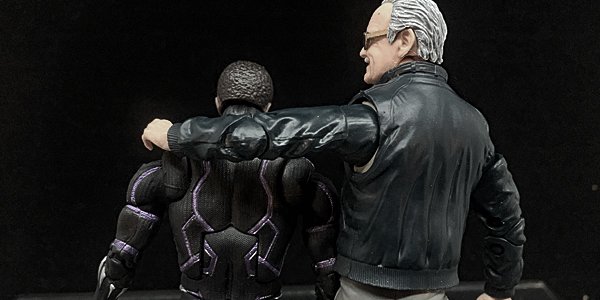 We mourn the loss of a great man, a great actor, and a hero so many young and old.

For decades the work of Stan Lee and many other talented comic artist and writers have captured the essence of the major events in our society. They have wrapped them up in colorful pages, but tackled these issues head on, more so sometimes than the leaders we look to for help.

In the last year it feels like we’re losing so much from freedom, our lives, basic civil rights,  and even more so human compassion. I just today saw someone I respect refer to the global pandemic as just a speed bump, and my heart hurt. In these days more than ever many of us look to our heroes for hope, for a bright light, and sometimes for a life line.

We look to Superheroes to see the best of what we are capable of as humans, and watch these heroes fight through the pain to save us. Their powers in the pages and on the screens are fantastical, but in reality are just extensions of our own human capabilities. When you strip away those powers underneath are just the same fragile beings we all are, and that is what bonds us to these heroes. We empathize, we feel pain, we feel the rush of joy, and the depth of loss in all the stories we consume.

It took me a few days to sit with the loss of Chadwick Bosemen, a man I have never met, yet I felt his loss personally. He has had a career of working as an actor, but it was his role as Black Panther that elevated him being a beacon for hope and change in the world. The film respected the source material as well as the people it represented, putting a hero and supporting cast front and center who represented groups of people who have felt forgotten and marginalized in both film and the world. The grace, strength, and hope that Bosemen gave on the screen touched so many, and showed in so many ways there is more than one way to tell a superhero story. To now to find out he did it all while knowing he would likely die, fighting for his life, and sacrificing time with his own loved ones to be this beacon to people around to world only deepens his impact.

The thoughts of all the people who found inspiration in his work, people that feel undervalued, unseen, under serviced, and unappreciated, being killed in our streets by those sworn to protect them bring me to tears. But there is light in the loss, we lost the man but not the message, and for us to lose that light would be the true tragedy.

Today we may mourn the loss of Chadwick Boseman, but also celebrate his life,  celebrate his legacy. and honor the passion in his soul. It does not matter what happens next in the MCU, that train will keep moving, what does matter is the spark he lit, the children he touched, the messages he left behind, and it is our duty has humans to carry that with us and do better.