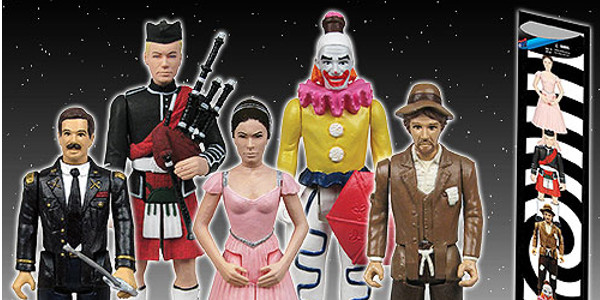 A Ballet Dancer, a Bagpiper, a Hobo, a Clown, and an Army Major all walk into a dark pit…and end up as a convention exclusive at the Entertainment Earth booth #2343.

Bif Bang Pow! continues their very popular The Twilight Zone 3 3/4-inch action figure line with the highly anticipated The Twilight Zone Five Characters in Search of an Exit 3 3/4 Action Figures In Color – Convention Exclusive. Now collectors can own the toys that didn’t know they are toys! Inspired by the classic episode “Five Characters in Search of an Exit” from Season 3 of The Twilight Zone, the set includes the Ballet Dancer, Bagpiper with bagpipes, Hobo with bag, Clown with umbrella, and the Army Major with sword. Each 3 ¾-inch action figure has five points of articulation and is re-imagined in color! As an added bonus, the figures come packaged in a special stacked ladder formation inspired by the well-known scene from the episode! At only 600 sets, this individually numbered limited edition may disappear to another dimension soon. 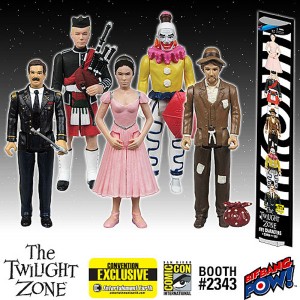 Available for the first time on July 8, 2015 at the Entertainment Earth booth #2343 at San Diego Comic-Con, fans will have the first opportunity to grab this individually numbered and limited edition exclusive!

Not attending San Diego Comic-Con 2015? *PRE-ORDER your The Twilight Zone Five Characters in Search of an Exit 3 3/4-Inch Figures Set of 5 In Color – Convention Exclusive at Entertainment Earth now!

See more of our The Twilight Zone collectibles here!