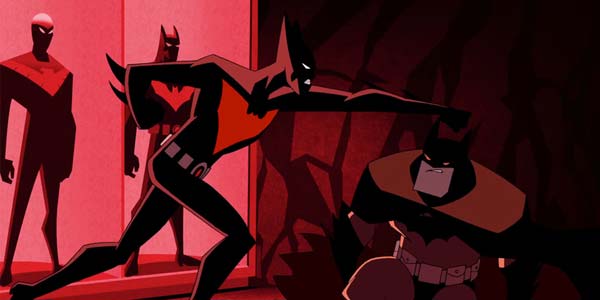 Batman Beyond returns in new animated short from Darwyn Cooke.

I feel like Batman Beyond is an under appreciated show.  While it rarely reached the astonishing heights of Paul Dini and Bruce Timm’s Batman the Animated Series (still THE definitive Batman, in my opinion), Beyond was a good adaptation that did the perfect job of balancing the core aspects that made the hero what he was, with enough new elements to keep the story fresh.

With that said, I’m glad to see DC paying respect to Terry McGinnis and the elder Bruce Wayne as part of the big Batman 75th Anniversary going on this month, via a new short from comic artist Darwyn Cooke.  The short stars McGinnis squaring off against a robotic Batman styled after his TAS/ New Adventures look, so I guess this is kind of a tribute to all three shows starring the caped crusader.

While it’s slight, and feels more like a single act from a half hour episodes, rather than a self-contained story, Cooke does a great job of replicating the style of the animated series, and the result definitely triggered the sense of nostalgia in me that I’m sure he was going for.

Justice League also gave McGinnis a nod late in their series, but I always felt it was kind of crappy to bring him back just to (apparently) kill him off, so in that respect, I’m much more pleased with this new appearance.

Check it out below, and keep checking DC’s website all month for more of the big Batman Anniversary.