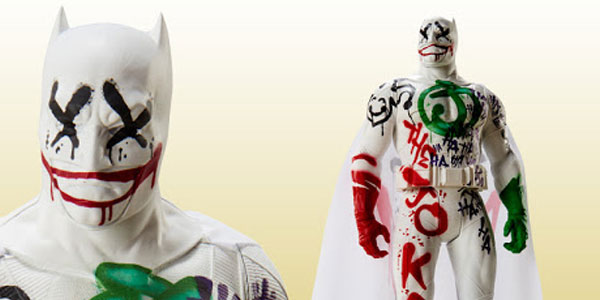 This might be the weirdest Batman coming to Comic-Con.

Jakks Pacific is teaming up with Entertainment Earth to deliver a super stylized, incredibly bizarre exclusive Batman figure, dubbed ‘Joker’s Wild Batman.’  The figure is an all-white repaint of the 19″ Ben Affleck Batman figure, tagged head to toe with bizarre graffiti courtesy of The Joker.

Call me crazy… but I actually kind of love the look of this figure.  If you’re with me, this bad boy will set you back an unfortunately steep $60 at the Entertainment Earth booth at Comic Con, but y’know what? He’s just weird enough that I may let my wallet take the hit.

Here’s more details on the Joker’s Wild Batman, who you can also preorder at EE at this link. 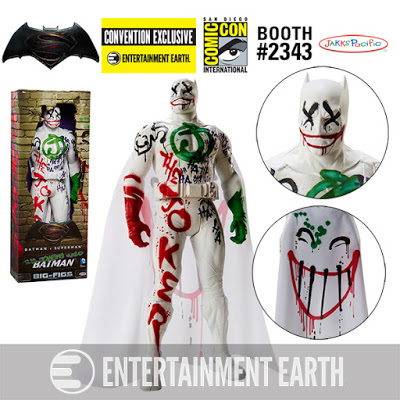 Run, run, as fast as you can… or the Joker will catch you, just as he did this Batman v Superman: The Joker’s Wild Batman 19-Inch Big Figs(TM) Action Figure – Convention Exclusive!

It seems friends and allies didn’t arrive in time, because Batman – sporting an all-white costume – has been vandalized by his greatest antagonist.

In red, black, and green spray-paint, the Joker had some fun with our Dark Knight’s suit, from signing his name down Batman’s leg to drawing a wild, smiling face on the back of his cape.

But if you think the Joker stopped there, how wrong you are; he defaced the grimy Gotham City walls of the box as well! In a way, it’s sort of cool… and completely anarchistic.

Available for the first time on July 20, 2016, at the Entertainment Earth booth #2343 at San Diego Comic-Con, fans will have the first opportunity to grab this exclusive!

(*NOTE: This item will first be sold during San Diego Comic-Con 2016 at the Entertainment Earth Booth #2343. If supplies remain after the show, pre-orders will be filled and shipped to you then – in August 2016. 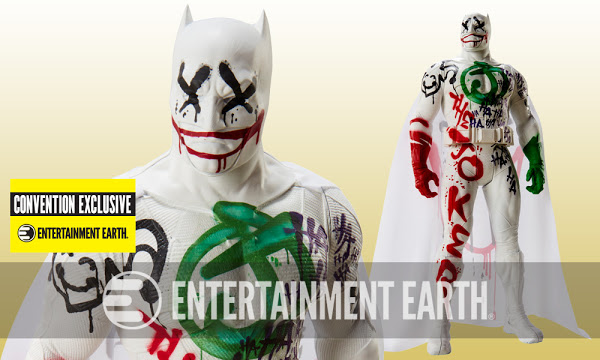