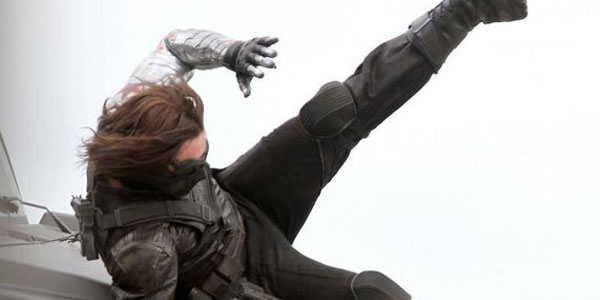 Captain America 2 scores one for the comic book faithfuls!

Captain America: The Winter Soldier is currently filming in the Cleveland area, and spy reports have given us a good look at the Winter Soldier as he will appear in the film.  And he looks awesome!

Most of Bucky’s modern costume seemed fairly camera-ready in its design, so I’m not surprised we don’t see any major departures from his printed costume, but I’m totally happy to see the cinematic version will be rocking his awesome, silver metallic bionic arm.  That’s one element of the character design I didn’t know how they’d translate, but it looks like Marvel Studios opted to go full-on, with bright silver metal plating and even the Red Commie star on the shoulder… it’s pretty exciting to see such a faithful translation.

I am curious how they’ll explain the robot arm… in the comics, Buck lost his real arm during the fall to his “death,” but in the First Avenger he seemed to remain pretty intact as he plummeted from the train.  I’m also interested that the one, BIG departure from the Winter Soldier’s comic costume is the mask– here he has a full face mask with goggles, instead of the domino mask.  It’s a good change, and lends truth to the rumors that his identity will be played as a reveal in the movie (at least to non-comic readers).  I wonder if he’ll lose the mask entirely after his identity comes out, or if they’ll try to pull off the domino mask instead?

We will find out soon, I’m sure… in the meantime, check out lots more spy photos from the Cap sequel, including more shots of the Winter Soldier in action.