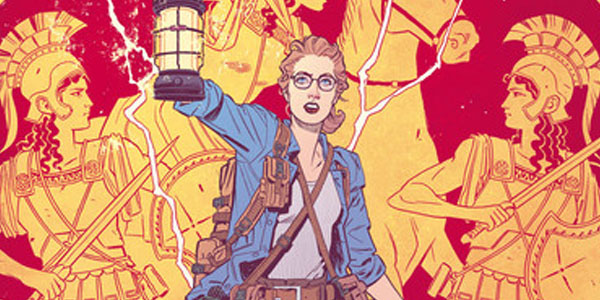 Fans of Greg Rucka, Nicola Scott and Liam Sharp’s epic Wonder Woman storylines can anticipate an added bonus to the “Year One” storyline by Rucka and Scott, in the form of a one- shot interlude (WONDER WOMAN #8, on sale October 12th, 2016) focusing on Barbara Ann Minerva, aka The Cheetah, written by Rucka with art and cover by Bilquis Evely (SUGAR & SPIKE). In a tale that spotlights Cheetah’s past, young Barbara Ann Minerva is sent on a quest to find answers to the Amazons’ most ancient secrets!

“The ‘interlude’ issue arose very organically out of the stories we’ve been telling in both Year One with Nicola Scott, and The Lies, with Liam Sharp,” said Rucka. “The opportunity to focus on Cheetah, on the origins of Barbara Ann Minerva, is one of those decisions that I think is going to add even more to what we’re doing.”

“This story is very thoughtful and human,” said Evely, “and I’m trying to bring this to the pages as well. We visit a lot of different places and archaeological reference points, which means I get to have a lot of fun! I think the readers will never see Barbara Ann in the same way again, after what Greg has been doing here! This is a singular opportunity I couldn’t pass up.”

“The fact that we’ve got Bilquis Evely drawing this issue just makes this all the sweeter,” continued Rucka. “I am such a fan, and her work is so consistently wonderful—everything from her characterization to her linework to her laser-sharp storytelling. So when her name came up, I pretty much fell over myself saying yes. One of the greatest joys about working on Wonder Woman has been the privilege of working with such tremendous collaborators, everyone from Laura Martin and Romulo Fajardo Jr to Jodi Wynne to the entire editorial team and, of course, Nic, Liam, and now Bilquis. I’m really hoping people will enjoy this issue as much as we do.”