As you may know, the world’s smartest dog and his boy are back October 9 with DreamWorks Animation’s The Mr. Peabody & Sherman Show exclusively on Netflix. 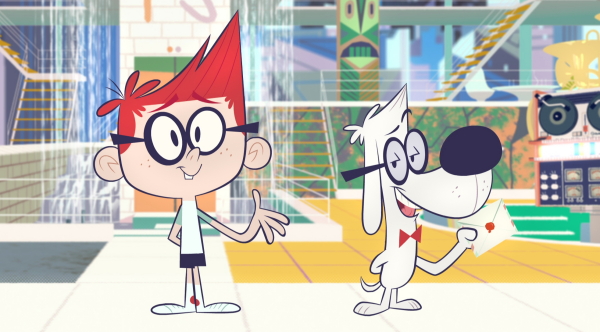 Debuting exclusively on Netflix October 9, THE MR. PEABODY & SHERMAN SHOW will turn the late night world upside down. Hosted by the world’s smartest dog, Mr. Peabody and his boy Sherman, the high-energy talk show is broadcast in front of a live studio audience from their swanky New York City penthouse. In each episode the co-hosts interview a menagerie of historical figures, like George Washington and Edgar Allen Poe, and bring musical guests to the stage, all while nosey neighbors continuously interfere with their own agendas.

This modern take on the animated classic pairing not only brings the characters to the 21st century, but places them in a setting not unlike the after-midnight talk shows of the 60s – but one for families to enjoy together.  Also in every episode, Peabody’s WABAC machine transports the talk show hosts and viewers on their Time Travel Adventures to the days of history’s most prominent figures, who are bent on accomplishing anything but what they’re known for – if not for a little help from Peabody.  Historical figures Mr. Peabody and Sherman visit in the first several episodes include Napoleon, Cleopatra, Mozart, and Marco Polo.  Peabody also uses the WABAC to bring important historical figures back to their modern day talk show set to bring history alive through hilarious segments and musical numbers.

With a comic pace that will keep audiences laughing at one ridiculous gag to the next, THE MR. PEABODY AND SHERMAN SHOW takes a sideward look at both world history and television through comedy built for kids and their families.

THE MR. PEABODY & SHERMAN SHOW is DreamWorks Animation Television’s seventh show to debut following the launch of their original prehistoric adventure DINOTRUX this past August. Quickly becoming a leader in producing high-quality television series for families around the world, DreamWorks Animation Television utilizes the talents of its award-winning cast of characters, storytellers and artists to produce hit shows like DRAGONS: RACE TO THE EDGE, ALL HAIL KING JULIEN, and THE ADVENTURES OF PUSS IN BOOTS.