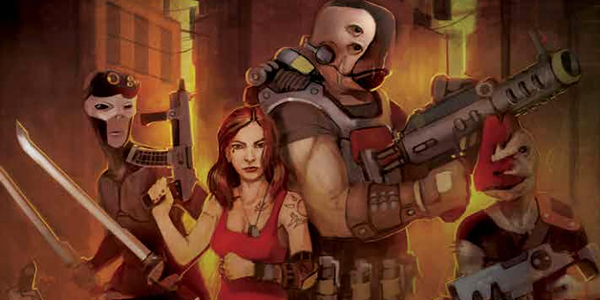 The latest offering from Plaid Hat Games, following 2012’s excellent child-friendly dungeon crawler Mice & Mystics, is a rather brilliant title that’s difficult to describe concisely.  Incorporating elements of territory control, worker placement, deck building, auctioning, and tile placement to name a few, City of Remnants is a unique experience that’s surprisingly simple and, above all, a lot of fun.

The game’s story revolves around a militaristic race of alien conquerors called the Yugai.  Refugee species from the worlds they’ve decimated are now stranded and dispossessed in a crowded cityscape and fighting for survival.  Each player manages a gang of one of four races and will fight for supremacy over this urban setting. During the course of a game, you will be battling to control key areas, recruiting new members, purchasing black market technology, and of course, fighting against the oppressive Yugai and rival gangs alike.

Two to four players are assigned pieces of a specific color (red, green, yellow, and blue) which represent a certain gang faction, each with its own unique abilities – which means each one plays differently and will require a slightly different strategic approach.  I have found though, that the game is superbly balanced and no one gang feels overpowered.  Each player is then given a starting deck of ten cards which includes a powerful gang leader as well as several recruits.  Each of these cards can be used to grant you certain bonuses or be played during combat.  The Nei’su faction, for example, is weighted towards building up zones quickly and for fewer credits than other races while the Iggaret are heavy on abilities that assist in battle.  The members of your gang are represented not only by the cards in your deck, but by nicely detailed miniatures. 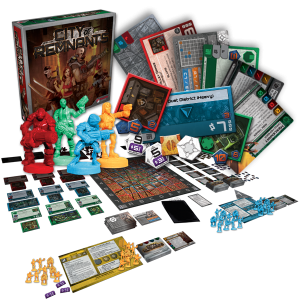 While your gang starts relatively small, you may try to recruit more members each turn by bidding on them. This is a shady, war-torn setting after all, and if you want help, you’ll have to pay for it.  At the beginning of each game round, four potential gang member cards are revealed in the play area.  These recruits not only have their own unique abilities, they all fight more efficiently when placed in certain gangs.  This leads to the interesting bidding mechanic.  On a players turn, they may announce their intentions to recruit a new gang member and select the one they are interested in.  In a clockwise fashion, each player has the option to bid on the card in question – either because they want it for themselves or simply so another player can’t have it. Bids continue until all but one person passes and they will pay the agreed amount to take the gang member.  If no other players place a bid, the original player gets the card for free.  Conversely, if another player wins the card, the original player who is taking their turn must select a new gang member and the bidding process begins again.  The drawback of bidding for recruits on another player’s turn is that you essentially take your turn early to do that action.  Each gang member you recruit in this fashion is added to your hand and another miniature is added to your gang pool (and can thus be placed on the game board).

Recruitment is one of several things you can do on your turn, however it is the only thing that will trigger an auction.  You may also spend money on black market goods, move your miniatures around the board, refresh your hand, sell product, or purchase development tiles.  These tiles represent buildings in the city that can be controlled and offer special effects for those who do.  Depending on the size of the tile, one to two minis must be placed on a development to control it.  This will grant the controlling gang with bonuses and grant renown points at the end of the round.  There are 200 renown points up for grabs at the beginning of the game and it ends on the round where all points have been claimed – the winner being the player with the most.  If these developments produce “product” (likely drugs or other illicit material), you may sell these for a pre-determined sum if you use your turn to take a “sell” action.  During a “movement action, you may move a number of minis, up to your influence value (more on that in a bit), three spaces each.  There can be a limit of two minis on a space per player.  The refresh action, which also happens automatically at the end of each round, allows you to keep or discard as many cards as you wish.  Your discard pile is then shuffled and placed underneath your main deck and you are able to draw cards up to your influence limit.  Several of these actions are a bit more in-depth than what I explained here, but this gives a general overview.  During each round, players will be able to take four actions total and may choose to do any of the items mentioned above in any order.  At the end of that round, players refresh their hand and gain renown for the developments they control, but not before the fearsome Yugai raid the city. 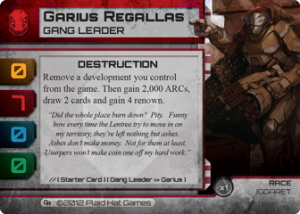 Once everyone has taken all of their turns, a player will reveal two cards from the Yugai deck, each of which depicts three spaces on the board that the Yugai enforcers are searching.  Represented by tokens that are drawn blindly from a bag, these may fall on spaces you control or occupy which trigger an immediate combat. In City of Remnants, combat is handled in an interesting fashion.  Players may play choose to play cards from their hand or off the top of their draw deck to use their battle rating or ability.  Once these are revealed and counted, the player will roll one special dice for each gang member in the contested space and each adjacent space.  If the dice results and card bonuses exceed the Yugai token rating (or other player’s total in the case of a player vs player attack), that player wins.  Ties are awarded to the defending player and the losing player must then remove one miniature from the board and permanently remove one gang member card from the game.  If the space is still contested (because two figures were on it) battle ensues again until only one faction remains in the space.  Keep in mind that, if you’re low on cards, you may choose to bribe the Yugai and pay them off to end the battle without combat.  Once any battles are resolved, players are awarded renown points for each development they still control, meaning they have at least one figure occupying each space in the development.

As these developments award players with a fair amount of points, aggressive tactics usually play out as each gang tries to overtake other’s property.  Battles that ensue when one player moves into another gang’s controlled space follow the same formula as a Yugai battle, with each person playing cards up to their influence level and rolling dice for each miniature figure in and around the contested space.  This influence level, which dictates your combat prowess, hand size, and movement ability can be leveled up three times by fulfilling any of five achievements.  These include having five controlled developments on the board, being able to get ten figures on the board, or simply saving up and paying $12,000 ARCs (Alien Refugee Credits – the game’s currency).  When any of those prerequisites are fulfilled, the player can announce it and move their influence marker up a notch. 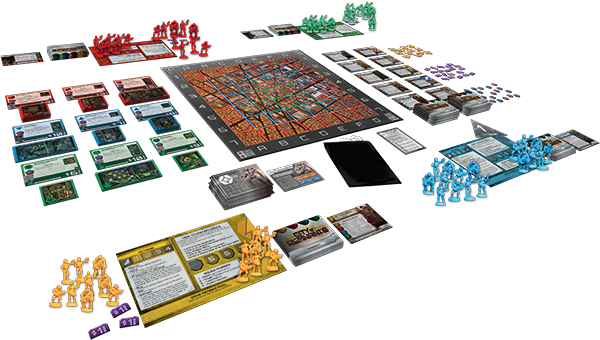 Battling over territory is only one way to gain renown, however.  Certain gangs may gain points for combat, Yugai battles always have a chance of awarding renown, black market items are worth one point each and, during a “sell” action, you can also spend $3,000 for one renown point.  All are viable options and open up the game to plenty of strategy.  Overall, the game is quite balanced and merges an abundant amount of mechanics together in a more streamlined fashion than I would have thought possible.  The only negative thing that I would say about physically playing the game is that the development, black market, and recruitment cards occupy a fair amount of room on either side of the board and their tiny text requires players to frequently get up or lean pretty far over other players to see what is available and read what it does.  To some extent Eclipse suffers from similar issues with its copious amount of tech and ship parts it involves, but it doesn’t take away from the game itself.  With experienced players, you can get through a game of City of Remnants in about two hours but, also like Eclipse, you will find yourself wanting to play again immediately, thinking of different strategies or something you’d like to try differently next time or about how you would fare with a different gang.  Overall, in terms of design and playability, it’s another huge success for Plaid Hat Games — straightforward gameplay, a concise ruleset, and a unique theme and aesthetic make this one a must-buy for tabletop enthusiasts.