Clerks Action Figures Aren’t Even Supposed To Be Here Today! 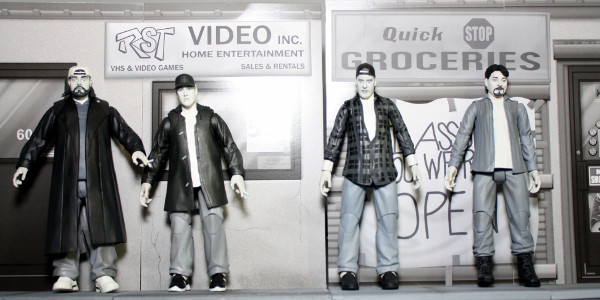 These Toys Would Be Great If It Wasn’t For The F******g Customers
In 1994, writer/director Kevin Smith made a film about the day in the life of two store clerks and the craziness that went on around them. The film was a huge success. Shot for only $27,000, it grossed over $3 million in the box office. The film, Clerks has gone on to achieve cult status.

To celebrate this memorable film, Diamond Select Toys has made action figures based on the four main characters of the film: Dante, Randal, Jay, and Silent Bob.

All four figures are in the Marvel Select scale, which is a little over 7 inches. This has become DST standard scale and it really works for them.
Now I’m going to sound extremely bias, but I’m a huge fan of the film Clerks and just think these figures are amazing.
The first thing that jumps out is these figures are in black and white. Seeing how the film was shot entirely in black and white, it only makes sense to have these figures the same way.
The articulation is standard as all the other Select line of figures. Though, due to his long coat, Silent Bob is just a little more constricted than the rest. But that’s OK with me.
The sculpts are very impressive here. And while the face sculpts are not dead on with the actors, they are really close. Sculptor Patrick Piggott is still able to convey the characters they represent.
The figures also come with accessories that were in the movies as well.  Things like hockey sticks for the rooftop game Dante and Randal play. A videotape. A packet filled with blunts. A boombox. And my person favorite, a carton of eggs to represent the customer who was looking for the perfect carton of eggs.
All four figures are meant to go together in a set.  They each come with a sidewalk base and a piece of a diorama. Randal and Silent Bob comes with the RST video store interior and exterior. Dante and Jay come with the Quick Stop interior and exterior. 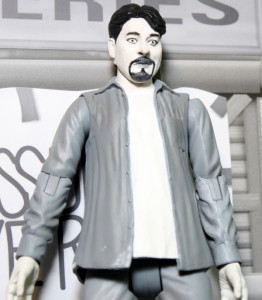 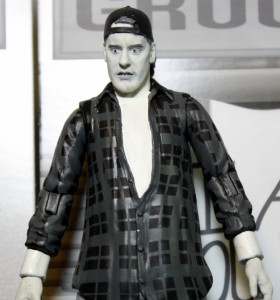 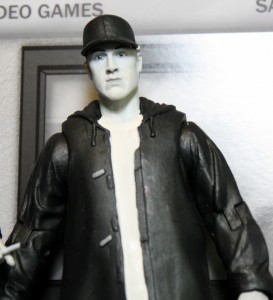 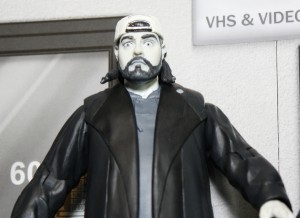 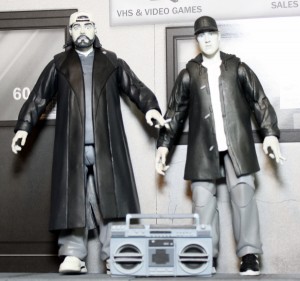 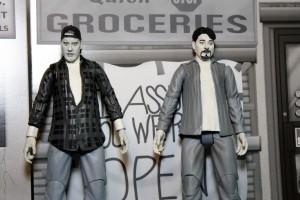 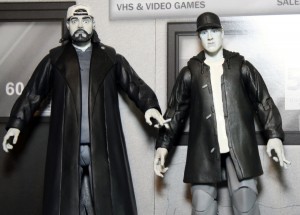 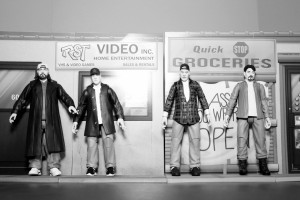 If you’re a huge fan of Clerks, or just Jay and Silent Bob, you’re going to want these for your collect. They are perfect for your collection.
Clerks Select 20th Anniversary Action Figures are available at most local comic shops or you can buy them directly from Diamond Select Toys.

And OF COURSE at Jay & Silent Bob’s Secret Stash. (Which you should definitely buy these from!!)