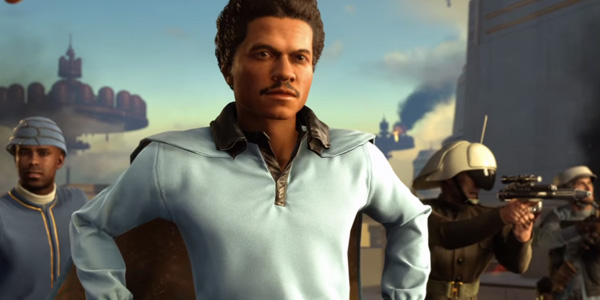 Star Wars Battlefront announces the latest expansion Cloud City Bespin. Lando and Dengar are the latest to join the heroes of Star Wars. New weapons include X-8 Night Sniper which is equipped with a enhanced scope with heat vision capable of finding humanoids in all weather and times of day conditions, and EE-4 constructed short and stubby for accuracy at close range with spray shots. Weak accuracy at range but makes up for it in fire rate.

New Star Cards Include Scout Binoculars,  Shock Grenade, and Disruption.  Help the team by using the binoculars to reveal enemy players to the entire team. Stop the enemies in their tracks with a non lethal dose of shock holding them long enough for the kill shot. Disrupt enemy droids, turrets, and blasters with a disruption wave.

Yes the player will have access to the Cloud City Car Vehicle. New Hutt Contract to unlock the powerful Ion Neutralizer as well as all new game mode called Sabotage. The Empire has deployed several tractor beams on the surface to prevent rebels from escaping the planet. The Empire uses Tibanna Gas(Native to Bespin) Generators to power the beams. 5 multiplayer maps locations include the carbon freezing chambers. Season Pass holders will receive access on June 21st. The Hutt contract will be available to all players. Here’s Hoping that the Cloud City Pilot outfit will be available as well.