Comic Con 2013: What We Now Know About The New Godzilla Movie 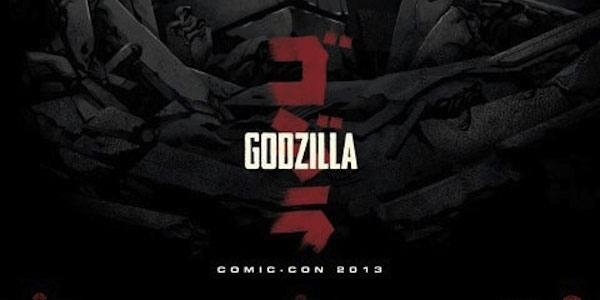 The Warner Bros/ Legendary panel just went down at Comic Con, and it included the first ever look at footage from  the upcoming Godzilla.

Maybe it’s my faith in Gareth Edwards, or the solid cast, but I was an easy sell on the new Godzilla remake coming next summer.  The king of all kaiju was revealed in the first footage from the new movie today at Comic Con, and the response has been pretty positive, so I guess I made my bet wisely.

The footage revealed a few things about the new movie, all of which sound like great ideas to me.  Here’s what we’ve got to look forward to:

1.  There’s a lot of human stuff.  The first half of the trailer focused entirely on humans, and played like a disaster movie.  There are refugee camps, people evacuating demolished city streets and buildings… hints of the same kind of humanity that made Edwards’ previous film Monsters so special.  This sounds perfect, especially since the original Godzilla was, first and foremost, one of the best disaster films of all time.

2.  There’s more than one kaiju.  The second half of the Comic Con footage shows a giant insect-like creature tearing ass through the city and demolishing an airport.  It allegedly doesn’t look like any classic Toho design, so who this thing is nobody knows… but Godzilla will not be the only giant beast we encounter in the film.

3.  Godzilla might be a good guy.  The teaser closes with Godzilla appearing, towering even over the bug kaiju, and belting out his iconic roar.  So we will see Godzilla fighting other kaiju in the film… whether that means he’s defending us– as he did in many later Toho films– or is just fighting them remains to be seen.

I’m happy with how this is all coming together.  I trust the director, and everything we’ve seen feels right for a modern take on the giant beast.  Of course, the Roland Emmerich/ Dean Devlin remake is proof positive of how incredibly wrong a Godzilla remake can become, but this feels more legit than that, if a little similar to Legendary’s current kaiju movie, Pacific Rim.

But if giant monster movies become the next staple subgenre, replacing super heroes as the “in” thing for blockbusters… well, I can think of worse things to see on the big screen.

For a more detailed look at the Godzilla presentation, check out Badass Digest.