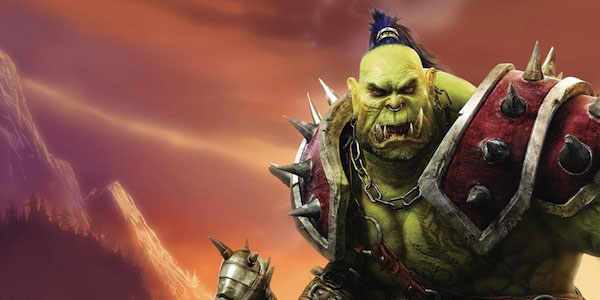 Duncan Jones showed off a special bit of footage for the Warcraft movie, which “WOW”ed fans at Comic Con.

I’m not really a video game guy, but for some reason Warcraft has always been one of those games that turns me off to such an extreme degree I don’t follow anything to do with it.  Maybe it’s their history of obnoxious TV ads, or the Reddit denizen denizens it tends to attract for all-night online game sessions, fueled only by Mountain Dew variants and severe loneliness?  Either way, mention the word “Warcraft” and I kind of just shut off.

I admit all this because I may soon have to eat crow on my (admittedly not very personal) relationship with the property, because Duncan Jones– David Bowie’s son and director of the crazy good Moon— showed off some footage from his live action Warcraft movie at Comic Con that played like gangbusters in Hall H.

Knowing little about the likely overly-complicated and predicable mythology of Warcraft, the concept that Jones brings an almost Western, Mad Max flavor to the high fantasy sounds intriguing… and the idea of adapting a PvP aesthetic into the film brings back fond memories of Doom’s clever use of FPS camera work.  Anything that triggers a nostalgic response to the Doom movie gets pretty much an automatic pass from me.

So you win, Warcraft.  After avoiding you for over a decade, all it took was some neat footage and David Bowie’s kid to convince me to finally give you a fair shake.  Please don’t let me down.